Mel Brooks and Thomas Meehan’s “The Producers” is a wild and whacky, rollicking uproarious musical comedy that holds the record for the most Tony Awards for a musical. It was a smash hit film, and on Broadway it ran for 2.502 performances – both starring Matthew Broderick and Nathan Hale. Now local audiences can watch it at Lakewood Playhouse’s thrust configuration projecting from a proscenium stage with seating on three sides. 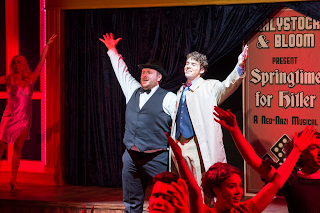 Legendary Broadway producer Max Bialystock (Chap Wolff) has recently produced a string of flops and is in danger of going broke. To his rescue comes dweeby accountant Leo Bloom (Will Johnson) who offhandedly comments that you could actually make millions by producing a flop guaranteed to close after opening night. Max thinks it is a brilliant idea and convinces Leo to partner with him. So they find the worst play in the world, “Springtime for Hitler,” and the worst director in New York, Roger DeBris (Henry Talbot Dorset), and Bialystock funds the play by – as their sexy female star and secretary Ulla Inga Hansen Benson Yansen Tallen Hallen Svaden Swanson (Hayley Ewerz)  succinctly puts it – schtupping every rich old lady in New York.
How that scheme works out is no surprise to anyone, but the path they take to get there is a comedy riot filled with great songs, fabulous dancing (choreography by Ashley Roy), and a riot of outstanding costumes designed by Lauren Wells.
To this reviewer’s eye, the most challenging and delightful thing about the production is Roy’s choreography, which includes tap dancing and nods to just about every dance tradition in musical comedy history with complicated movement by 20 cast members in a small space.
Wolff and Johnson are outstanding as Bialystock and Bloom with over-the-top acting and dancing and singing. It needs noting that on opening night Wolff was a stand-in for Brad Cerenzia, who was injured during rehearsals and might or might not return to his role. Wolff had only a week to learn his lines and rehearse, and his performance was flawless.
Ewerz is suitably steamy as the sex-starved Swede Ulla, who schedules sex every day at 11. She sings and struts marvelously on the seductive song “When You’ve Got it, Flaunt it.”
Kyle Sinclair as the Nazi pigeon aficionado Franz Liebkind, is a master of broad humor as he ably demonstrated in outstanding performances in “Avenue Q” and “Peter and the Starcatcher.” In “The Producers,” he doubles as an unnamed drunk who crashes the opening scene.
Dorset and his lover, Carmen Ghia (Erik Davis) Parody swishy homosexuals without being offensive, and Dorset does an amazing tap dance to the title song “Springtime for Hitler.”
Every member of the ensemble cast is great, with standout performances by Mark Anthony, Ton L. Williams and LaNita Antoinette Walters.
If you want to laugh ’til you cry while toe-tapping to a fun musical score, take yourself to Lakewood Playhouse for “The Producers.”
Tickets are quickly selling out, so get yours soon. The show runs almost three hours, but every minute zips by.