The Revolutionists One Night Only 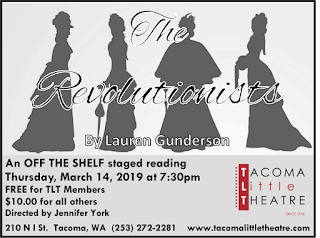 Lauren Gunderson’s, The Revolutionists will be performed one night only as the next show in Tacoma Little Theatre's Off the Shelf program.

The play is directed by Jennifer York and features “four beautiful, badass women” in an irreverent, girl-powered comedy set during the French Revolution’s Reign of Terror. Playwright Olympe de Gouges, assassin Charlotte Corday, former queen (and fan of ribbons) Marie Antoinette, and Haitian rebel Marianne Angelle hang out, murder Marat, and try to beat back the extremist insanity in 1793 Paris.