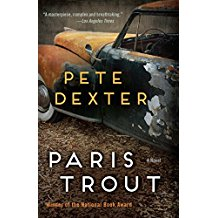 When reviewing/commenting on the first draft of my novel Tupelo, Ned Hayes made reference to Paris Trout by Pete Dexter. I had read it years before, and I remembered I had been greatly impressed with it at the time, but I couldn’t remember much about the actual story or Dexter’s writing style. (One of the great things about getting older is you can re-read stuff and it’s like you never read it.) So I read Paris Trout again and was astounded at how good it was. It’s a book that turns Southern Gothic inside out and creates a whole new genre unlike anything else ever written. The title character is the strangest and most horrific character I have ever come across in literature. It’s a cliché to say “I couldn’t put it down.” But if it were not for having to eat and sleep, I would not have been able to. Paris Trout is horrifying, hilarious, and compelling.
I mentioned it on Facebook, and my friend Ned (a great writer in his own right and the person responsible for me reading it) commented that Dexter is a writer’s writer. Damn right he is. 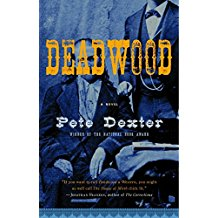 I loved Paris Trout so much that as soon as I finished reading it I picked up another Pete Dexter novel, Deadwood. For the first third or so of Deadwood, I was slightly disappointed, partly because I could not sense much of a story arc, and partly because a major character and an American legend, Wild Bill Hickock, didn’t do much of anything except get drunk, play poker (usually losing) and shoot things off the head of a dog—a circus-type performance played out in a bar with an accommodating and trusting dog. But then, starting with a chapter called China Doll (a Chinese prostitute) it started getting increasingly more compelling. It’s a true story, and I’ve been told it was meticulously researched and accurate. The town of Deadwood is beautifully depicted as what must have been one of the rawest and wildest towns in American history, and some of the characters such as Calamity Jane and an unnamed “soft brain bottle fiend” should stick in my mind for as long as I live—in direct contradiction to my earlier statements about not remembering well. 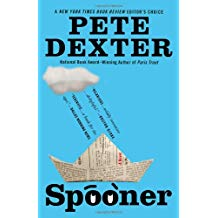 And again, as soon as I finished that one, I started another Dexter novel, Spooner. I’ve barely started it, but already I am floored with Dexter’s writing, the uniqueness of his characters and how skillfully he weaves together the elements of a story. If I were a writing teacher, I would use Dexter as an object lesson in the art of writing. I would talk about how well he uses similes that are creative and the result of careful observation and memory. For example, in Spooner he describes a profound and sudden silence as being like when you dive into water and the moment you go under all sound ceases. When I read that I immediately recalled when I was a teenager diving off the high board at the swimming pool in Tupelo, the sounds of all the kids shouting and splashing and laughing melded together as a kind of symphony as I descended toward the water and became utter silence once my ears were under water. I had not thought of that in half a century, but Dexter brought it back to me in such a way that I didn’t just understand the silence his character experienced, I heard it.
If I were teaching Dexter, I would talk about the opening paragraph of Spooner. It is two sentences long; the first sentence is convoluted and poetic and packed with information. It is followed by a short, bare-boned sentence that hits with the force of an ax chopping wood. The next paragraph follows the same kind of pattern, so by the time you have read these first two paragraphs you are hooked, and you are dying to know about the boy named Spooner who has just been born. That’s good writing. If you’re looking for books to sink your teeth into this summer, give Dexter a try.