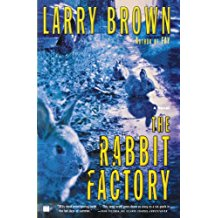 “She’d taken her house shoes off and including her feet she was as nice a woman as Eric had seen. The nice was coming off her like the heat off his granddaddy’s stovepipe.”

That wonderfully poetic and colloquial line comes from Larry Brown’s novel, The rabbit Factory. I’m reading it for the second time, having first read it only months after it came out in 2003. At the time, Brown was much admired in the state of Mississippi (he lived in Oxford) and was fast becoming well known throughout the land, but he unexpectedly died of an apparent heart attack the next year.

The great short story writer Barry Hannah—also from Oxford and who also died young and unexpectedly—called Brown the king of “grit lit.”

I “met” Larry Brown through other Mississippi writers shortly before his first book, Facing the Music, was published. Never had the honor of meeting him in public, but we corresponded. He even submitted a short story to our magazine Mississippi Arts & Letters, but we were not able to publish it; we had just declared bankruptcy.

He was a big influence on me. People say I create quirky characters, but man, my characters are as normal as coffee in the morning compared to the whores and con men and rednecks Larry Brown writes about. His writing is funny and real, like a modern day Flannery O'Connor but without all the religious stuff.

I’m afraid that now that he’s dead his work will be forgotten. That would be a shame because he’s too damn good for that.