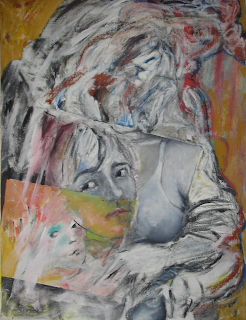 I was asked to write a statement for the announcement of my upcoming retrospective show at Tacoma Community College. Here is what I came up with:


In the early 1970s while living in a one-room walkup in the Chelsea district of Manhattan, I did a series of small crayon drawings on paper. Many of them were city scenes taken from memory and imagination or from sketching what I could see from my fire escape. I loved the bird’s-eye view, and I fell in love with layering, scraping, and layering again with the crayons. I gave away hundreds of those works. The only one I still have is “Deli,” which I gave to my then girlfriend, now my wife of 43 years. 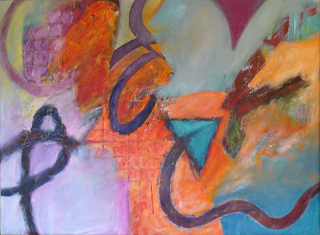 A little more than a decade later I discovered oil sticks or oil bars. The artist who told me about them said they were the ultimate crayon, and he was right. I discovered that marvelous effects could be made by pushing the oil bars around on a hard surface and that the layering and scraping away I had so enjoyed with crayons could be done much better with oil bars and oil sticks. At first I did figurative works on paper, and gradually the figures became increasingly abstract, and I started working larger on canvas with acrylic underpainting. I would fill the canvas with random brushstrokes, often pushing the paint around with trowels or scrapers, then let it dry and draw into it with the oil bars. The work became completely abstract, but every once in a while, a recognizable figure would sneak back in. I began to mix the oil bars with oil paint, pouring, scraping and working with brushes and sticks or whatever I could find to push the paint around.
My abstract paintings reflect influences of the abstract expressionist movement, which was the predominant art movement in the country when I was studying art. Although abstract and formalist, they are informed by nature. I try to capture the essence of movement and struggle as seen in nature — the way a baby bird reaches up for a worm in its mother’s beak, the way a fish leaps out of water, the sensuous way plant tendrils wind around one another, and the way human beings walk, run and dance. I do not try to copy the look of these things but try to capture their essences through gesture.
Recognizable parts of human and animal bodies and plant life show up in my paintings – an arm here, a breast there, a snake, a fish, tree limbs; but these paintings should not be interpreted in any literal or narrative sense. The importance of these forms is not so much what they may look like or remind the viewer of creatures both human and animal. Rather, what is important to me is their emotional impact and the way the forms react in an abstract way to one another; that is, in the harmony and contrast of visual forms.
Patterns such as stripes, dots and checkerboard squares, are used as a contrast to and a means of visually holding in check the more amorphous gestural forms. A primary visual element is the contrast and balance of opposites such as rough and smooth, intuitive and planned, hard and soft edges, bright and dull colors, and so forth.
The paintings are colorful and often bring about a feeling of joyful celebration — the spirit of dancing or improvisational music. But, at the same time, many of them have an ominous or threatening feel perhaps thinly veiled beneath the celebratory surface.
I rarely have an idea of what a painting will look like when finished, but rather I discover what it is about in the process of painting. The titles are added after the works are finished, after I see what the paintings remind me of after they’re done. Sometimes the titles are the names of songs I was listening to while working.


In 2002 I had open heart surgery. For a long time after that I did not have the energy to paint, and even after I started back, I painted much less than before. I am also a writer. I have been writing art reviews for area publications since 1995 and have also written novels. After my heart attack, I discovered that writing satisfied my creative urges as well as painting did. In 2009 I finished my last painting in preparation for a show at the Convention Center in Seattle. I have not painted since and doubt I will ever go back to it.