A Night on Broadway at Olympia Little Theatre

Olympia Little Theatre presents A Night on Broadway an evening of song and dance with Harry O'Hare and Micheal O'Hara in a special benefit performance for the theater, two performances only, Saturday, Aug. 27 at 7 p.m. and a Sunday matinee Aug. 28 at 2 p.m. 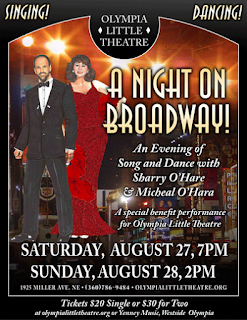 The couple with the sound-alike last names have been married for a long, long, long time and have been a staple on the Tacoma theater scene for almost that long. I cannot count the times I have had the pleasure of reviewing plays they’ve been in — mostly musicals, but sometimes dramatic plays as well. Sharry was most recently seen at OLT as the mother in Life is Complicated, a dramatic role in which she played the heavy. Other memorable roles have included that of Patsy Cline’s friend, Louise Seger in Always . . . Patsy Cline at Tacoma Little Theatre and as Lily in Six Dance Lessons in Six Weeks with her husband, Micheal, also at TLT. Micheal has also performed in countless musicals around the South Sound and has also directed many. When performing together there is undeniable chemistry between the O’Hare-O’Haras.

But I will let Sharry tell about themselves:

We have been singing together for 25 years, totally separate from the theatre roles we perform.  When we first married in 1990, we loved the idea about the similar names and how we could capitalize on using them for a show:  SHARRY O'HARE . . .MICHEAL O'HARA.  But we had such totally different styles, Micheal a trained singer who read music and I was post-vaudeville. There was a gig I was supposed to sing at shortly after we married with my then singing partner, Frank Kohel, and something happened that he couldn't make it, so Micheal stepped in and we discovered with him being a tenor and me an alto that made for an interesting combination.

Throughout the years we have performed at a variety of venues, many worthy of story telling.  We rarely turned down an opportunity to perform as we really enjoyed the audience connection on a more personal level.  For the past 5 years or so, we have "donated" ourselves for fund raising auctions at theatres, retirement homes and some private organizations.  Those are great fun because you never know who is going to bid or where you are going to end up performing.

Here is a sampling of some of our "stages" we've done our variety show on:  street fairs, fitness centers, a tugboat holiday party, paper doll conventions, mental facilities, business openings, baptisms and funerals, apple squeezes and ice cream socials, garden soirees, retirement homes, banquets, and in the homes of people who are having a special event. And my all-time favorites, the ubiquitous fraternal clubs to include the Kiwanis, Chambers of Commerce, Oddfellows, Elks, Eagles, Lions Club, Knights of Columbus and my personal favorite, the Moose Lodges.

For OLT, we are doing our standard 11 songs, and we are adding 6 more new pieces that we are feverishly learning right now. Our accompanist is Debra Leach, who has played for us the past 20 years.  We try to find a nice balance of older standards that everyone knows and then throw in some newer songs from Broadway shows that they might not have heard.  We chat throughout, just like we are in their living rooms and the audience is always a part of our act.  That is the connection I was talking about.  Unlike a character you play, we are in full view of everyone and we can see them and their reactions.  We don't bring people up on stage, but we may include them in general statements or ask if they know what show a song comes from.  The program will probably be an hour and we will bring out our glitzy duds.

For almost every show like this that we have done, we have always been invited to stay after, commune with the folks and that has been what I love--getting to know the people around you and finding new friends.