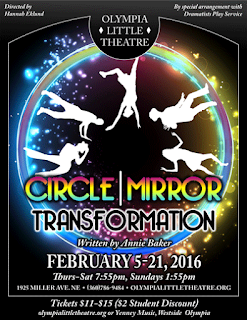 Watch out, Olympia, Circle Mirror Transformation is coming to Olympia Little Theatre, and it’s just liable to knock you out. This play by Annie Baker is an Obie Award winner for Best New American Play and was nominated for the Drama Desk Award. It opens at OLT Feb. 5.
In a little town in Vermont, an acting teacher named Marty (played by Meghan Goodman) runs a class for adult would-be actors and puts her class through acting exercises such as pretending to be trees, beds and baseball gloves. They act out scenes using only nonsensical words, and they are asked to write deep personal secrets on scraps of paper and watch and listen as the other actors act out their stories. Not unexpectedly, some deep emotional scars come to the surface.
The people in the class are Schultz (Scott Douglas), a recently divorced carpenter; Lauren (Jesse Morrow),a high school student; Teresa (Chelsea Williams), a former actress, and Marty's husband, James (Tim Shute).
Director Hannah Eklund says: “They all have different reasons for enrolling in the course, but they find common ground in that they're all at a point of transition. I think it's a deeply human story about seeing yourself through someone else's eyes, and recognizing your inner potential to create positive change in your life. I've got a stellar cast, and I think we all feel really fortunate to be able to bring this beautiful script to life here in Olympia.”
New York Times reviewer Anita Gates called it “absorbing, unblinking and sharply funny.”
This play will be Eklund’s directorial debut, but she is no stranger to the stage. I praised her work in my 2009 review of Moonlight and Magnolias at OLT, and I wrote that she was “disgusting as Gooper’s uptight and manipulative wife, Mae” in Cat on a Hot Tin Roof. It’s not easy playing disgusting.
Goodman was last seen on OLT's stage this October in Unwrap Your Candy. She is also on the board of Olympia Family Theatre. Shute was previously seen at OLT in A Few Good Men and Murder on the Nile. He also directed Almost, Maine in 2012. Morrow is a recent Michigan transplant. Her first Olympia theater appearance was as Snoopy in OFT's A Charlie Brown Christmas. Williams is making her Olympia community theater debut after several years away from the stage. She previously worked with an improv troupe in Seattle. Douglas was Owl in OFT's Winnie the Pooh, and has been in several of Animal Fire's summer Shakespeare productions.
“It's a special kind of alchemy,” Eklund says. “This play is so dependent on the depth and sincerity of the characters. And there are certain aspects of the characters that were most important to me that the actors embody. So first I looked at whose ideas about these characters most aligned with mine. It's rare that someone walks in and just IS the character (though that did happen here in one case!). But I was also looking for actors who wanted to make the character their own. All of these actors have a great balance of consistency and the ability to surprise. A few of them I have had the privilege of sharing the stage with, so I'm familiar with their processes. And of course, there's looking for chemistry between actors. This cast has been so enthusiastic and receptive, and really committed to bringing some fantastic, complex characters to life.”
Shute says: “I was very excited to learn that Hannah Eklund would be directing her first show at OLT. Hannah and I played the male and female leads in OLT's production of Murder on The Nile. That show still holds as one of my favorite theater experiences, and so I jumped at the opportunity to work with her again.In (Circle Mirror Transformation) we see three strangers and a married couple come together to learn about themselves and each other through various traditional actors’ exercises. It is a wonderful example of what being an actor on stage is all about. Stepping out onto on a stage with the lights and the audience glaring back at you can be a scary thing, and the process of preparation helps build trust and support between the actors and the director, and in spite of what we learn it is that closeness that musters the courage needed to leave everything you have out on the stage. The cast Hannah has selected is one of the best I have had the opportunity to work with. I trust that will translate into a warm, humorous, touching, and poignant production that will have the audience contemplating their own lives and relationships, even in the midst of their laughter and enjoyment.”
Olympia Little Theatre, 1925 Miller Ave., NE, Olympia, Feb. 5-21, $10-$14, available at Yenney Music, 2703 Capital Mall Dr., Olympia, 360).786.9484, http://olympialittletheater.org/