AIDS, Friendship, the Internet: Life in the Bonus Round

Note: This is a story that I read at a World AIDS Day event at Tacoma Art Museum sponsored by Pierce County AIDS Foundation. 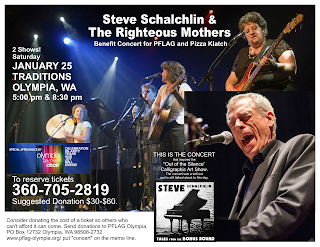 AIDS and the Internet brought us a friendship that has lasted twenty years. It began when my wife, Gabi, set up a one-page website in honor of our son Bill with a small photo of Bill and three brief paragraphs:

Bill was openly bi-sexual. In April of 1995, he was assaulted in a hate crime here in Olympia, WA (USA). On May 8, 1995 Bill committed suicide, despite loving support from his family, friends and many wonderful people in our community. Bill was 17 years old. He was a bright, warm and creative young man. He is greatly missed.
Please remember him, and speak out to end discrimination, hate speech and violence against people who are gay, lesbian, bi-sexual and transgendered — and against anyone for any reason. This website focuses mostly on gay, lesbian, bisexual and transgender equality and safety issues, but it is all connected. We are all connected. And silence is where the hate grows.

Not long after she uploaded the website, she got this email from Steve Schalchlin:

I just found your home page and when I saw the picture of your son and story that went with it, I wept right here in the living room. I can't tell you how much it affected me, that someone so beautiful and obviously so loved by his mother would still be crushed by the hatred in this world. If only these bigots truly understood how much damage they cause.
I invite you to view my web site. I am a gay man living with AIDS and as part of my own struggle to survive I have created this site the centerpiece of which is my online diary where I detail what I'm living with. For some reason, people all over the world are being drawn to it and it has helped many people, especially many Christians to stop and think about what they do.
I appreciate your fight, dear lady, and I want you to know that I am in anguish over your loss. That you took this pain and turned it into a fight against hatred moves me and reminds me that there are great people out there. And you are a shining example.
Your Friend,
Steve
We found out that Steve was a songwriter, and that he was dying. He posted words about his journey toward death in the online diary. His partner (now husband), actor and playwright Jim Brochu, encouraged him to set the things he was writing to music. He said, “Take the pain and put it into song.” Steve discovered that music had the power to heal. No, writing music did not miraculously cure the disease that was destroying his body, but it gave him the will to go on.
Steve built a musical around the songs he had been writing with his partner, who wrote the book. They called the play The Last Session. Steve could barely get out of bed, but he wanted to see, at the very least, a reading of his play before he died. He did get to see a reading of the play and even got to play the lead role when it was workshopped in Los Angeles in the spring of 1996 — singing, playing piano, and acting (which he had never done before) despite living with full-blown AIDS. Others saw it too and were impressed enough to raise money to produce it Off-Off Broadway. It premiered at the Currican Theater in New York in 1997. It got rave reviews. Peter Marks in the New York Times called it "Blessed... haunting... exquisite... exuberant” and “from the heart."
Matthew Mirapaul, also with the Times, wrote, "There are large doses of humor... The Last Session... is as dramatically engrossing and warmly human as Angels in America and Rent."
And then through random sheer luck Steve’s name was drawn in a lottery to choose patients living with AIDS who were to receive new drugs, and these drugs have saved his life.
The Last Session later played in Los Angeles and then back to New York for a celebrated Off-Broadway run at the 47th Street Theater. It has been produced by both professional and amateur companies all over the country, including Houston, Dallas, Denver, Baltimore, Omaha, Rochester NY, Indianapolis, Boston, and most recently a long run in London.
Steve, still alive and in good health despite horrid side effects to drugs, continues to tour the country telling his story of living with AIDS and playing in venues large and small.
Our friendship has continued. He has traveled to Olympia four times to do benefit concerts for the local PFLAG chapter and once to play the piano that John Lennon composed “Imagine” on as part of the IMAGINE Piano Peace Project. Steve played and sang “Imagine” and “Gabi’s Song,” which he wrote in honor of our son. That experience inspired him to write his peace cantata “New World Waking.” He explains: “I'm sitting there beneath a shade tree in the front yard at the Clayton's home in Olympia, Washington about to put my hands where John Lennon's hands once were, the instrument whose sound inspired the song 'Imagine', and I knew in that moment what ‘New World Waking’ was meant to be: A journey to find a simple song of peace.”
“New World Waking” debuted in San Francisco at the 30th anniversary concert of the San Francisco Gay Men's Chorus at Davies Symphony Hall and has sense been performed in music halls and cabarets in New York and other cities, including South Puget Sound Community College in Olympia.
Steve and Jim now live in New York and continue to collaborate on musicals including The Big Voice: God or Merman and Jim’s one-man show about Zero Mostel, Zero Hour. Gabi and I continue to advocate for gay, lesbian, bisexual and transgender equality. And we will always the grateful that Steve Schalchlin read her one-page post on the Internet.