Have you read the Freedom Trilogy?

It’s time for me to toot my own horn again and tell you about a trio of books you really should read if you haven’t already. They’re my books. I could probably come up with all kinds of non-ulterior, non-self-aggrandizing reasons for posting this, but the truth is I just want to sell a bunch of books.

The Freedom Trilogy is my proudest accomplishment as a writer to date. In it I created a fictional town near the Mississippi Gulf Coast, invented a history for the town going back to the Civil War, and populated the town with idiosyncratic characters that I hope you will love (and in some cases hate).

In the first book, The Backside of Nowhere, David Lawrence, a famous movie star, returns to his hometown in the swampy coastlands to reconnect with the family he left behind twenty years earlier—a sweet mother he loves and an autocratic father he can’t stand. A massive hurricane hits the coast, and David is trapped in his father’s house with his parents and with an old girlfriend he still loves and a bitter enemy from high school days.

In a flashback to the 1980s, David has a run-in with two juvenile criminals, Sonny Staples and Malcolm Ashton. Two decades later Sonny and Malcolm reappear as major characters in the second book.

In the second book, Return to Freedom, Malcolm and Sonny and their families move into adjacent apartments in a new condo built by David Lawrence after the hurricane. Both Malcolm and Sonny are now ex-convicts trying to rebuild their lives. Malcolm is struggling with an alcoholic wife and three disturbed teenage children; Sonny has become an evangelical preacher with an attraction for young girls.

"The town of Freedom becomes very real on the page and one can tell that Clayton sees every location intimately. Clayton knows every detail from the street signs to what cigarettes that Bo, the night cook at the diner, is smoking. This gives the effect that we are truly emerged in his world."- Joshua Swainston, amazon.com review

The third book, Visual Liberties, ties up most, but definitely not all, of the twisted family conflicts of the first two books. Malcolm Ashton’s daughter, Molly, is now a college freshman majoring in art. She is drawn to a charismatic art professor who has a reputation for seducing the most vulnerable of his female students (a more sophisticated version of Sonny Staples). She is also attracted to her classmate, Frances Gossing, an artistic genius whose social skills are non-existant. And the unscrupulous preacher, Sonny Staples tries to reform his evil ways with help from an unexpected source—a lesbian couple that runs a local hamburger joint. 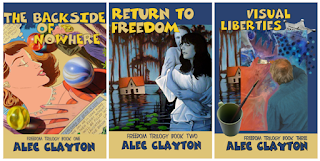 The three books of The Freedom Trilogy can be ordered from your local bookstores or from amazon.com.

Learn more at Mud Flat Press , and please tell your friends.
Posted by Alec Clayton at 9:39 AM