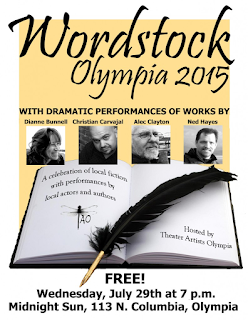 I just finished reading ebook/dp/B00UW51OLW/ref=sr_1_3?ie=UTF8&qid=1437672910&sr=8-3&keywords=the+protest" target="_blank">The Protest
by Dianne Kozdrey Bunnell. Wow! What a powerful and moving story. It’s a classic tale of good and evil with the good personified by a naïve and open hearted young mother and the evil in the guise of a charismatic and manipulative fundamentalist preacher.  And it is a fictional memoir, meaning it really happened, only the names (and maybe a few other things) have been changed.


I was lucky enough to get to read an advance copy of The Eagle Tree by Ned Hayes. It is set in Olympia, Washington and is the self-narrated story of a teenage boy with severe autism who takes on big-time developers who are dead set on destroying a part of a local nature park. Hayes is the author of previous novels Couer d’Alene Waters and Sinful Folk (a 2014 Pacific Northwest Bookseller's Award nominee).
I was also honored to be able to read an advance copy of Christian Carvajal’s Mr. Klein’s Wild Ride, an hilarious adventure in a theme park devoted to sexual pleasure. Imagine Disneyland for swingers. Forget 50 Shades of Grey, this is a rainbow of primary colors celebrating libidinous pleasure. Carvajal is a well-known local actor director as well as a writer for the Weekly Volcano and author of the novel Lightfall.
So why am I introducing these novelists? Because they will be joining me as featured writers at Wordstock Olympia 2015 at the Midnight Sun in Oympia on Wednesday, July 29 — graciously hosted by Theater Artists Olympia whose Improbable Peck of Plays IVopens  in The Midnight Sun Aug. 7.
Wordstock will be an evening of readings by local actors from these books plus my novel Visual Liberties. Carvajal and his wife, Amanda Stevens, will read a selected scene from Visual Liberties. Deya Ozburn will read Carjaval’s short story “Retreat,” a “funnel” story for Mr. Klein’s Wild Ride written under the pseudonym Lynn Savage (no secrets here). Bunnell will read from her own novel, and actor Jackson Jones will read a selection from Hayes’s The Eagle Tree.
Following the readings there will be book sales and schmoosing with the authors.
If you’re anywhere near Olympia, you don’t want to miss this. Tell your friends about it.
Wordstock Olymia 2015, Wed. July 29, 7 p.m., the Midnight Sun, 113 N. Columbia Street in downtown Olympia.