Literary Heroes Down for the Count 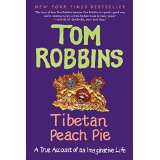 I recently bought Tom Robbins’ latest book, Tibetan Peach Pie. The first sentence of the preface says, “This is not an autobiography,” but autobiography is precisely what it is. It is a book of episodic tales of events in Robbins’ life, all written in his unique style—a style that for many years captivated the hell out of me.
I didn’t get very far into the book before I realized that his writing style is wordy and cutesy and that he strains for humorous affect.
Damn. I had so loved his earlier books, especially Jitterbug Perfume, which was not only outrageous and funny, but was brilliantly structured. I can’t remember much of anything about any of his other books, but I know I liked them when I read them.
I mentioned my reaction to his book to a couple of writer friends and they said they had the same reaction to other Tom Robbins books (apparently they reached the same conclusions much quicker than I).
I talked about Tom Robbins with Jack Butler via email. Butler wrote:
“This is also how I felt about Brautigan, although I dearly love some of his titles and individual lines—shoveling mercury with a pitchfork.  In every generation there seem to be those who mistake novelty for importance.  After a while, though, it becomes apparent they're one-trick ponies, and one grows bored.”
Robbins has written some great lines, and he definitely comes up with good titles—Another Roadside Attraction, Still Life With Woodpecker, Half Asleep in Frog Pajamas. You can’t not admire the inventiveness of a writer who creates a character who has giant thumbs and uses them for marathon hitch-hiking. But I become weary of his cuteness.
For example, in Tibetan Peach Pie he wrote about watching Natalie Wood as a child star:
“My scruffy whippersnapper heart opened like a sardine tin, my impressionable kiddish brain sidestepped the domination of cognitive experience; I sensed the world in me and me in the world, felt fundamentally connected, saw the many as all and the all as one; one and all bobbling along forever and ever in an unending, indestructible river of tears and tickles, breath and meat.”
There’s some amazing stuff in that word stew, but that kind of writing for hundreds of pages has got to make for painful reading. I’m only up to page 65 and I’m beginning to wonder if I can make it to the end. I’m beginning to think I can take Robbins only in short spurts. How did I stand it when reading his earlier work? I know that I did. I even enjoyed it. Has he always been like this and I just didn’t notice, or has he gotten worse? The only way I could find out would be to re-read some of his earlier books, but the thought of doing that scares the hell out of me.
I’ve recently had a similar experience with another literary giant whose stature shrunk upon re-reading. It started with a play. I saw One Flew Over the Cuckoo’s Nest at Lakewood Playhouse in Lakewood, Washington. It was a marvelous production. Scott C. Brown as McMurphy gave Nicholson a run for his money. But I noticed something I did not recall noticing in the book or in the movie. McMurphy was racist, and women, to him, were sex objects and nothing more. The black orderlies in Cuckoo’s Nest were black stereotypes. Nurse Rached (brilliantly played by Jennifer Rifenberry) was a horrid bitch, true to the book and movie, and the other women played by Julie Wensel and Alison Monda, were brainless bimbos. I got the impression that not just the character McMurphy, but the author, Ken Kesey, was racist and misogynistic. I was so intrigued by that revelation that I read reviews to see if other critics had the same response, and they did. I re-read the book, and it became clear that Kesey viewed blacks as dumb and devious and women as either witches or whores. Dammit. There went another literary hero down for the count.
I wonder now if I re-read other literary heroes from my past if I would have a similar reaction. Actually, I have recently re-read some from the ’50s and ’60s—Steinbeck’s East of Eden and Joseph Heller’s Catch 22—and I found them to be even better than I remembered. But I suspect that if I read Douglas Adams or Jack Kerouac again the air would go out of two more heroes. I don’t think I want to test that theory.