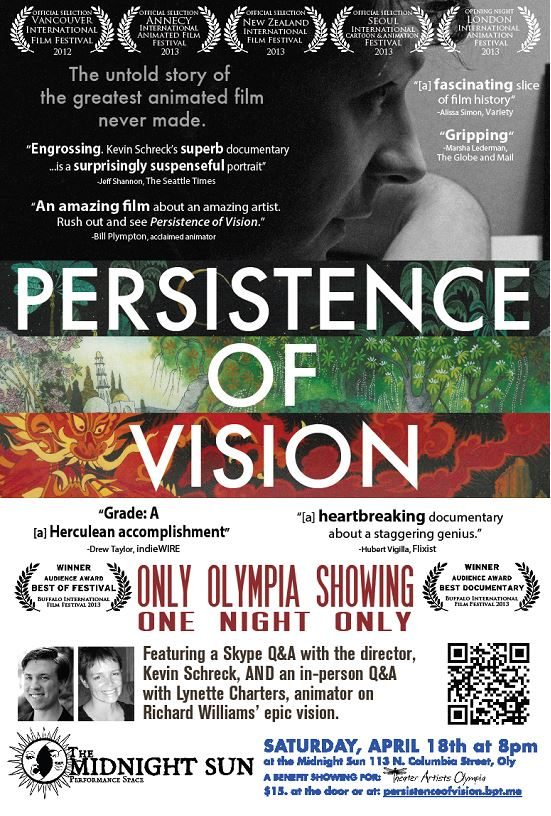 Theater Artists Olympia is presenting a one-time viewing of Kevin Schreck’s animation documentary Persistence of Vision, the critically acclaimed, award winning film about the making of Richard Williams’ unfinished masterpiece, The Thief and the Cobbler, billed as “the greatest animated film of all time”.
Williams, probably best known for Who Framed Roger Rabbit, worked for more than a quarter of a century on his masterpiece “only to have it torn from his hands.”
TAO says, “Filmmaker Kevin Schreck has woven together mind-blowing animation, rare archival footage, and exclusive interviews with key animators and artists who worked with Williams on his ill-fated magnum opus to bring this legendary story to the screen.”
Persistence of Vision includes archival footage of Williams combined with interviews with his co-workers.
Lynette Charters is an animator who worked on the film. She now lives in Olympia with her husband, actor John Serembe, seen recently in TAO’s The Head That Wouldn’t Die and Harlequin Productions’ The 39 Steps. There will be a Q&A with Charters after the screening, as well as an exclusive Q&A via Skype with filmmaker Kevin Schrek.
Charters said:
I worked at Richard Williams Studio in Camden for a little under two years. I worked as a special effects animator which in those days involved working with the camera department to create effects, occasional rendering (moving sketches such as the sand scene in the opening sequence) and  making key animation drawings for elements such as water, clouds, fire, dust etc. At RWS this was particularly involved as Dick used to take great delight in making full-scene animated backgrounds such as swirling clouds. We used to jokingly call it "moving wallpaper." Some of these drawings would take two-to-ghree hours, and given Dick’s fondness for putting things on 24 frames per second as opposed to the general 12 frames per second, plus the 10 hour day before overtime we signed up for, this was no mean feat resulting in me laughing hysterically under my desk more than a couple of times as means of a release. The crew was passionate and enthusiastic. We used to sometimes work all hours just to get a scene done. There were other jobs available in London at the time so we were there by choice, it was a labor of love and it was going to be beautiful.”
All proceeds from the screening will be donated to filmmaker and to the Midnight Sun Performance.