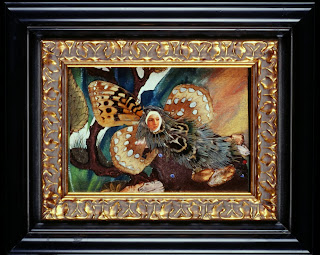 The gallery at downtown Olympia’s Olyphant Art Supply seems to attract artists who are new to Olympia. Case in point: Hart James, who is certainly not new to art but is new to Olympia. Her first Olympia show at Olyphant features 20 small assemblage/collages with surrealistic images, lots of gilded frames, butterflies, Renaissance figures, leafs and feathers. They appear to be delicate, and are meticulously constructed in the tradition of Joseph Cornell boxes and Kurt Schwitters collages. 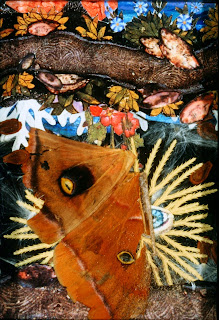 One of my favorites is “the Gift,” a pair of white plaster hands extending from the frame and holding a bird’s nest as if offering it as a gift. I see it as death giving the gift of life, primarily because of the black lace veil.

The central figure of “In a Flutter” (pastel, bird wing, sticks and paper) is a stark white female nude with heavy contour lines and feathers covering her face. It is an ominous figure, yet lyrical. 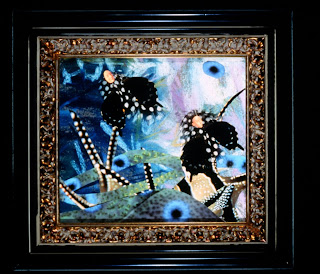 There are three similar pieces called “The Woman That Flew,” “Side Stroke in Heaven” and “The Space Between.” They are fantasy images of butterflies or other fanciful creatures with women’s faces. The faces appear to have been taken cut out from pictures of 16th century frescoes. They are beautifully done but to me a little too sweet and otherworldly.

A group of pictures on the left wall walk a tightrope between abstraction and figurative work. There is one, for instance, that has a form that looks something like a cocoon that stands as a woman’s torso, recognizable as such because of two rocks for breasts and a white rock for her head. Part of a butterfly wing could be moving arms or angel wings. Next to this is a similar piece with white sticks for legs. The figures in these pieces verge on being overly obvious. They might have been better if they had gone more in one direction than the other — either toward more abstract or more recognizable. I think trying to walk that tightrope detracts from the beauty of the design and texture. It is James’ fine sensitivity to design, to materials, and her polished craftsmanship that make her works outstanding, so she doesn’t need the recognition of figures in abstract configurations as a hook to catch viewers.

The best of her works are a couple that are more clearly figurative and narrative such as “One Called Woman,” which has a cutout of a figure identified as from a painting by Raphael, and “Innocence Escaped,” which has a group of figures from a Renaissance painting and a much larger figure of a woman who seems to be emerging from the bodies of the background figures. The skillful ways in which these figures are integrated with fine drawing, butterfly wings and other collage elements is simply wonderful.
This show has only a few more days to go, but Hart James will also have a show at Breathe Yoga Studio during Olympia’s Arts Walk.