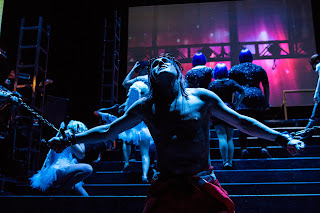 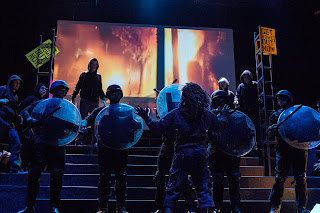 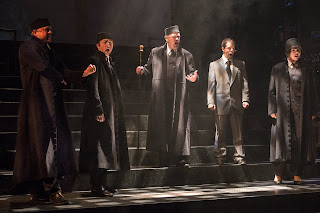 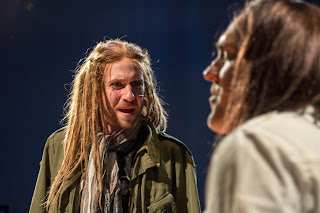 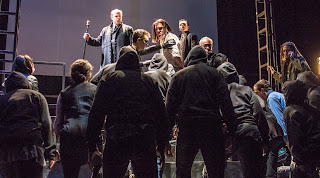 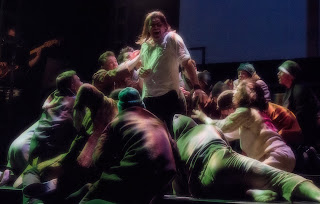 Harlequin Productions’ staging of Andrew Lloyd Webber and Tim Rice’s musical “Jesus Christ Superstar” is unlike any other, yet it has elements reminiscent of many others such as “Les Misérables,” “West Side Story,” “Rent,” and even touches of “42nd Street” with a bit of Motown thrown in.

In a program note, director and scenic designer Linda Whitney quoted Webber as saying the newly mounted arena tour in England and Australia is “the closest to the original intent of any production ever.” It is that production that Harlequin has adapted for their stage.

Much of the rock opera, which has no spoken dialogue, is dark and angry with moments of extreme tenderness and one song offering outlandish comic relief – when Antonia Darlene in a flaming red dress singing “Herod’s Song” with a back-up ensemble. Imagine if you can Aretha Franklin with Motown backup singers and dancers doing the Charleston.

The play is set in modern times with Jesus and his disciples being poor rabble rousers like today’s Occupy movement and street youth, while the Jewish establishment and Roman power structure are the equivalent of bankers and Congressmen and corrupt judges backed up by cops in riot gear.

Whitney’s set is a dark and congested array of industrial ladders and towers on a set of tiered steps rising to a back wall where there are three large video-projection screens. The costumes by Jocelyne Fowler and the wigs and hair by Darlene look authentic and scruffy and, in the case of the powers that be, slightly exaggerated.

The large casts moves about this congested set in stylized rhythms to the amazing choreography of Jessica Low, who also plays the role of Mary. Her masterful choreography involves street people in hoodies marching in procession like medieval monks, protestors climbing towers, and the large ensemble in dancing fight scenes.

The story is that of the last week in the life of Jesus with a focus on the conflicts between Jesus and Judas and Mary Magdalene’s desperate love for a man who is also a god, expressed most movingly in Low’s the great solo “I Don’t Know How to Love Him.”

It opens with a dramatic scene of riot police with large shields pushing back protestors, and then goes to intimate scenes depicting the relationship between Jesus and Mary, and Jesus and Judas. A scene of prostitute and their clients and pimps cavorting on the temple steps leads to the scene of Jesus clears out the temple. In the Garden of Gethsemane Jesus (Bruce Haasl) pleads with God in the heart-wrenching song, “I Only Want to Say.” The scene of Jesus being whipped is cringingly realistic, and finally there is the dramatic crucifixion with a flying cross made of light towers of the type seen at outdoor rock concerts acted out to the tune of a jazz-and-classical-inspired instrumental by Bruce Whitney’s six-piece band.

This version of “Superstar” is not just a musical; it is a spectacle with all stops pulled out for heightened emotional impact.

Haasl as Jesus and Christian Doyle as Judas are stunning. Their solos and their highly emotive acting are breathtaking. Also outstanding are Josh Krupke as Pontius Pilate, Joe Woodland as Caiaphas, and Samantha Camp, Gregory Conn and Benjamin Cournoyer as priests.

This production is loud, it is emotionally draining, and it is stunning in its dark beauty.