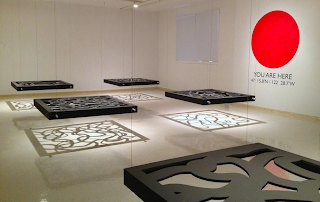 The fascinating thing about Michael Johnson’s new sculptural installation at Kittredge Gallery is that you can see it from many perspectives, literally and metaphorically. The installation is in the smaller back gallery. Viewed through the double open doors from the larger front gallery it can be taken in in a single, all-encompassing glance, and from this initial glance a viewer can gain various impressions and interpretations. Then walk into the gallery and take a closer look and you will see it in one or more entirely different lights. Finally — and you should do this only after thoroughly looking — read the explanation on the wall label to understand what you’re looking at.

My initial impression when scanning the room was that I was seeing a Japanese home or a theatrical set design. The overall impression was of power, stark contrasts and elegance of form. Of course the big red dot on the back wall helped to foster that impression. It looks like a Japanese flag, and the sparse forms suspended from the ceiling in front of it and throughout the room look like Japanese screens. Or like some Matrix-like futuristic scene.

Underneath the big red dot are the printed words “You Are Here,” and under that is printed: “47 15.8’N/122 28.7’ W”  — presumably points of latitude and longitude — and we realize that the crux of the installation has to do with directions. The red dot is the starting point seen on directional schematics in a building such as a mall or the lobby of an institutional complex.

Walking into the gallery we get a better look at the forms suspended from the ceiling. There are six of them, each approximately eight-feet square suspended horizontal to the floor from wires and about the level of the viewer’s knees. There is no indication of media, but my guess would be wood painted black. They look much heavier than they probably are, and there is a feeling of defying gravity or a conflict of massiveness and lightness. I’m reminded of the title of Milan Kundera’s book The Unbearable Lightness of Being.

When close enough to look down on these forms we see a network of curvilinear shapes that worm their way through the open space between the four sides of a heavy black frame. These shapes also have the flavor of Asian writing, which resonates back to my first impression of a Japanese house, or perhaps a shrine.

The forms are slightly minimalist, expertly crafted and elegant from a purely aesthetic point of view, regardless of whatever meaning or interpretation may be taken from them. The formal fascination is in comparing the intricacy of the parts to the simplicity of the whole.

But there is meaning beyond the formal elements. The wall text explains that the shapes of the pieces, which are referred to as a three-dimensional drawing, represent paths traced by GPS technology and computer-generated visual code.

I don’t usually treat a work of visual art like a mystery performance, but I’m going to withhold the answer to the question who or what created the pathways and how he, she or it did it. It will be more fun for viewers to discover that for themselves.

I’ve seen only one other show of Johnson’s sculpture, and I have been impressed with everything I’ve seen so far. His work is inventive, intelligent and created with sensitivity to form and finely honed craftsmanship.