"Population" explosion at the Museum of Glass

Ray Turner's exhibition Population at Museum of Glass is a stunning show. Turner, a former Stadium High student from Tacoma now living in California, is showing almost 200 portraits painted on glass with lush oil paint slathered on the slick surface like cement poured from a mixer and spread with a yard rake. Each painting is 12-inches square. His colors and textures are breathtaking, and his likenesses of real people - not idealized or beautified in any way - offer glimpses into the souls of his sitters. They might as well stand naked and tell their innermost secrets. 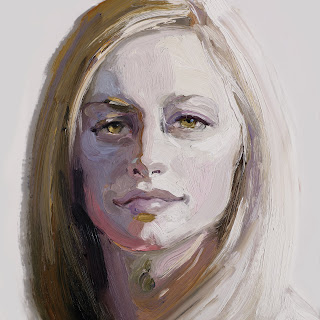 This show is a psychological tour de force and an artistic tour de force. It is Lucien Freud meets Chuck Close. Turner's portraits have the intensity of Freud's figures, and like the best of Close's portraits they are simultaneously realistic and stylized, painted with a direct, head-on point of view and isolated on flat, unadorned backgrounds. The faces are painted on the glass, which is on top of the flat, single-hued surfaces, so there is physical depth of a fraction of an inch, and with the incredibly thick paint there is a feeling of even more depth.

Some of the eyes and mouths in the "Good Man/Bad Man" group appear to be deep caves. The show begs to be viewed in two ways: up close for careful inspection of the individual portraits and from a distance to see the patterns of color modulations from piece to piece, which are beautifully arranged - especially on the title piece, a grid of portraits covering 21 feet of one wall. This wall would be stunning even if there were no faces but just the flat color squares. Then upon closer views we see that in most of them he repeats variatons on the background colors in the faces, which creates a marvelous warm glow without distorting the realism of the natural face and hair color.

All of the portraits are realistic except for those in the piece called "Good Man/Bad Man," a grid of 45 heavily distorted faces, all but one on black backgrounds and most with tones of ghostly and sickly whites and grays. Many of these look inhuman or monstrous. Some have no features at all, while others have smudges of black and gray to represent eyes and mouths. Many of them look like gauze-wrapped mummy faces, and at least one looks like Hannibel Lecter. The one that is not on black is a fiery red portrait on an equally hot red background and it is situated in the dead center. It is like looking into the depths of hell. The bad men are frightening, and the good men appear to be their tortured victims.

For each venue as this show travels around the country, Turner paints portraits of local people. For Tacoma, he has included portraits of the Museum's glassblowers, youth from the Hilltop Artists in Residence Program and Jason Lee Middle School, members of the Puyallup Tribe, local artists and some of his alumni from Stadium High School.