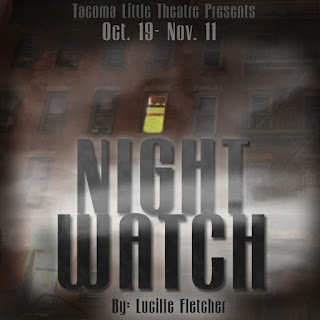 Elaine Wheeler (Nicole Locket) screams as she sees, or believe she sees, the body of a dead man in the window across the way. The police find nothing. Her husband John (Gabriel McClellend), claiming that Elaine may be on the verge of a breakdown, calls in a lady psychiatrist who agrees with his suggestion that Elaine should commit herself to a sanitarium for treatment. The plot moves quickly and grippingly as those involved – Elaine’s old friend and house guest, Blanch (Jenifer Rifenbery); the inquisitive and rather sinister man who lives next door; and the nosy German maid, Helga (Ziggy Devlan)– all contribute to the deepening suspense and mystery of the play as it draws towards its riveting and chilling climax.

Read Michael Dresdner's review at http://michaeldresdner.blogspot.com/ and watch for my review in The News Tribune Nov. 9, just in time for the final weekend.