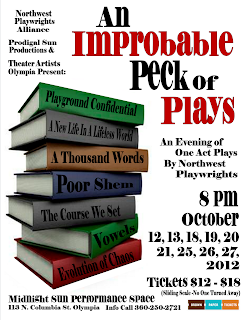 Combining resources, connections, and talent, three different theater organizations present a selection of plays from the Northwest Playwrights Alliance, directors from two theater groups, Prodigal Sun Productions and Theater Artists Olympia, with actors from all over the Puget Sound area.

Playground Confidential
by Bryan Hawthorne
Directed by Samantha A. Camp

A Thousand Words
by Evan Sesek
Directed by Tom Sanders

The Course We Set
by Amy Tofte
Directed by Tom Sanders

Evolution of Chaos
by Bryan Willis
Directed by Samantha A. Camp