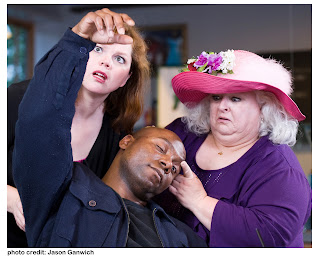 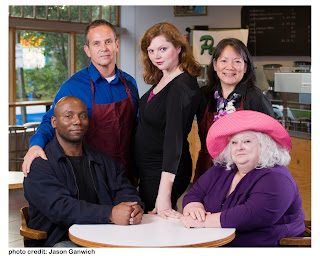 “Java Tacoma: Episode 38” is a laughable light confection live soap opera set in Tacoma replete with local digs. You may have seen Episode 37, but if you didn’t it doesn’t matter. In the tradition of all good TV drama they start off with a recap of the last installment. The audience is informed that in the previous episode Jeri accidentally put her dead husband’s ashes in the coffee at Perky’s Coffee House and it turned out to be the best coffee anyone had ever tasted. Bert and Linda are going to have to close the coffee house. In this episode we find out that they’re not going out of business after all; they’re just moving to dreaded Federal Way, where children are born without souls.

That’s the premise. It’s a simple and ludicrous story with imaginative plot twists and loaded with double entendre and other word play, well written by local playwright Curtis B. Swanson and nicely directed by Randy Clark.

The cast is outstanding. Betzy Miller plays Kate, a crazy, outspoken local character who is convinced that she drives men wild with her sexual allure. Samantha Camp plays Jeri, a real estate agent who easily matches Kate in the appeal department. With sly facial expressions and posture she manages to make the simple act of giving out her business cards seem like an indecent proposal – with the running joke “I buy and sell. I go both ways.” The coffee house owners, Bert and Linda, are played by Mick Flaaen and Aya Hashiguchi. They serve as the (somewhat) straight characters (i.e., second bananas) off of whom the comics bounce their jokes. But they break out of their roles for one briefly insane scene when they appear as a Latin lover and an Asian woman. This strange interlude is totally out of context and seems to be not real but perhaps Jeri’s hallucination. It borders on offensive ethnic stereotyping but is more of a jab at the stereotypes than at the characters. Furthermore, the jabs at Asian women are softened because Hashiguchi is Japanese.

The final cast member, Demetrick Louis, plays an unnamed customer and a dead man. The previous sentence is not true, but it is necessary in order to describe Louis’s acting without giving away a major element in the story. As the dead man he does ‘nothing’ hilariously and we cannot but admire his ability to remain motionless without bursting into laughter as Kate and Jeri try out their sexual allure on him. As the mysterious customer he makes wild statements with astounding deadpan dramatic flair.

Kudos to Allan Loucks, composer of the original theme song and original score.

Subtitled “Friends, Neighbors and Siblings,” “Java Tacoma: Episode 38” is a one-act play that runs just about an hour and is over far too soon. It’s pure, inspired silliness, that does not aspire to anything greater than light fun, and while it may be a little too far out for some people, I found it totally enjoyable.

Tickets are $15, and that includes your choice of coffee (decaf or regular), tea and an assortment of baked goods. If I had the time and didn’t have to commute from Olympia, I’d go back to see Episode 38 again, and I hope there will be an Episode 39.

For reservations: By phone (253) 267-0869,  By email: info@dukesbay.org
Reservations are recommended. Tickets payable at the door, cash or checks only.
Posted by Alec Clayton at 10:19 AM