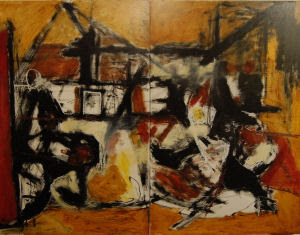 At last Olympia has a real art gallery. Not to slight the previous galleries in town, but let’s face it: even though Olympia galleries have shown excellent art in the past, they’re essentially gift shops and hobby shops that also show art. But Black Front Gallery (newly opened in a tiny space at 106 4th Ave. E.) has the look and feel of a big city gallery, with hardwood floors; clean, uncluttered walls; and serious art that doesn’t have to compete with crafts and gift items for the viewers’ attention.

Currently showing are works by Olympia painter Shaw Osha. I have reviewed her work in the past, and have generally been impressed. There are a couple of works in this show that are outstanding. A few others not so much.

There are six paintings in the show. All are abstract paintings in oil with subjects derived from nature or from the human figure. Each painting is done in two panels. In three of the paintings, the panels are joined together, while the other three are displayed with six-inch gaps between them.

“I Want to be Your Lover Man” is large and expansive. Swirling abstract forms in orange and blue lock together on a flat surface like land and water coming together or like autumn leaves clumped together in blue water. It is beautifully painted with exuberant brushstrokes, layered space and an all-over consistency of paint application. Like the best Abstract Expressionist paintings of the past, it looks as if every brushstroke were applied with the same speed and energy. It has a loose and open feel, and a nice balance of broad strokes with sharp lines.

“Las Meninas” is more densely packed. About five feet square, it seems to be an abstraction of an urban scene with old buildings and a jangle of power poles and wires. Broad strokes in rich browns and reds, both transparent and opaque, are intersected by heavy black marks and delicate areas of white. Black drawing reminiscent of Franz Kline overlaps flat areas and depicts figures and what may be a network of bridges in the background.

“Whether to Go to 75th St.” is the perfect example. It is a painting of figures on a street, walking in front of a store with display windows. There is a terrific interplay of light and dark, flat areas and areas of layered depth, broad strokes and sharp lines, thin and thick paint. The composition is solid. The placement of figures is critical. Small things such as the way the color change on the central figure’s arms lines up with the bottom of the window indicate a mastery of color and design. But the illustrational nature of this painting detracts from all of Osha’s painting skill.

The other three paintings are a trilogy based on ancient myths and universal themes (and, I suspect, homage to Michael Spafford’s paintings based on Greek and Roman myths). These paintings, titled “Circa Warns Odysseus Against the Sirens,” “Foot Race on Behalf of War and Democracy” and “Sleep and Death” all depict heroic struggles between wrestling figures, with the figures spanning two separate panels in each painting. In two of them, the figures are black with red-orange backgrounds, and in the third the figures are red-orange on a black background. I don’t think these work. They look like studies for larger paintings and the trick of spanning adjoining panels is way overdone.

(pictured: “Las Meninas” by Shaw Osha
Posted by Alec Clayton at 9:45 AM

I think you are giving Shaw way too much credit as an artist if you think her work is an homage to Michael Spafford. I doubt if she even knows who Spafford is! She is merely one of the better students of Simon Kogan.

I think Shaw Oshas artwork is exciting. It's fresh and provacative. Olympia won't hold on to her for too much longer. Thank you Jason for your vision for downtown . The new gallary is fabulous. We're lucky to have the opportunity to see Shaw Oshas art showcased in such a sophisticated way.

I want to thank you Mr Clayton for a thoughtfull critique of Ms Osha's show at Black Front Gallery. You obviously took the time to experience her work. On the other hand, I was taken aback by "anonymous's" thoughtless stab at her knowledge of current art. I know Ms Osha to be a well studied artist who keeps current on the local and international art scene. In my opinion "anonymous's" put down of Ms. Osha reveals a lack of knowledge about the purpose of the critique process. I only hope Olympia can be a stimulating and supportive enough community to keep Ms Osha showing in our town.

My reference to Michael Spafford was more descriptive than qualitative, based on subject matter and design. Shaw responded to my review in a personal email in which she indicated that she knows and admires Spafford's work. She wrote the email before anonymous made his or her comments.