Watch what you ask for 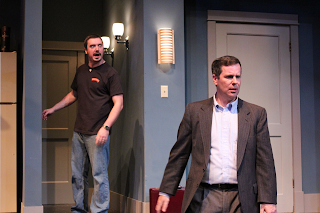 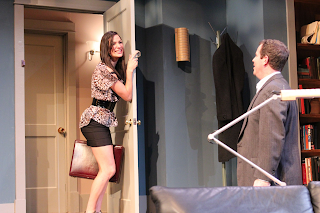 Review "The Love List"
Harlequin Productions’ “The Love List." is one of the most insanely funny plays I’ve seen in a long time, Jill Carter’s set is outstanding as usual, the script by Norman Foster was witty and inventive, and each member of the three-person cast was phenomenal.
I don’t want to spoil any of the surprises in the story by outlining the plot – and there are plenty of surprises, although once you figure out the basic (crazy) premise, it’s easy to predict things before they happen which is great fun, because it’s so rewarding to be proven right and everything you suspect after the first act does happen, but always with a surprising little twist you didn’t expect. One little twist after another.
"The Love List" offers comedic proof of the truism: be careful what you wish for, you just might get it.
Bill (Gerald B. Browning) is a statistical analyst, a profession he admits is about as exciting as “an Amish keg party.” He’s just turned 50 and he’s divorced and lonely. His best buddy, Leon (Ryan Holmberg) is a cad and a womanizer who hates to admit he’s over the hill and no longer attractive to women. For his birthday, Leon signs Bill up for a dating service run by an old gypsy woman, the first step in which is to fill out a “love list” enumerating, in order of importance, the 10 most desirable qualities in a mate. As expected, they have entirely different ideas about what should be on the list, but they at least agree on number four. They keep changing some of the other items, but number four is sacrosanct. Hint: it has something to do with sex.
After Bill finishes filling out the list, Justine (Alison Monda) appears. She’s his dream woman, the woman who loves him unconditionally and has all 10 of the qualities he most desires – and she is the woman who soon turns both Bill and Leon’s lives upside-down.
This show is Browning’s Harlequin debut, and it is the first time I’ve seen him perform, even though he’s done work on area stages ranging from Centerstage in Federal Way to Burien Little Theatre and Seattle’s Second Story Rep and Public Theatre and has appeared in numerous film and television projects. He seems born for this role. He fits the character so well that I’m tempted to say he’s typecast even though I have no idea what he is like outside this role. He plays Bill as a man who is nervous, highly excitable and unsure of himself.
Holmberg is a young actor on a fast track to the top of the heap among area actors. I first saw him in a student production of “Laramie Project: Ten Years Later” at South Puget Sound Community College and was impressed with how easily he played nine different characters, and then I saw him as Bogle in “Jacob Marley’s Christmas Carol” at Olympia Little Theatre, and I was sufficiently impressed to name him “Best Supporting Actor” in my annual Critic’s Choice column. At first – early on in the first act – I was uneasy watching him in this show. His posture, the way he held his arms and hands, and some of his facial expressions looked like a parody of a street gang member, which doesn’t fit with his character. But I soon got used to that and began to buy into him as a man who is arrogant and shallow on the surface but actually quite real and sincere.
The third actor and the only woman in the show – the character who truly makes this show sparkle and zing – is Monda, one of the most talented, versatile, and hardworking actors in the South Sound region. Monda is equally at ease in comedy, drama and musical productions. I’ve seen her as a zombie and a witch, and I’ve seen her rock the house in musical reviews – the recent “I’m Into Something Good” at Centerstage and “Summer in the Sixties” at Harlequin, for which she was another of my Critic’s Choice picks (Most outstanding singer (female) in a musical or music review). In this show she gets to demonstrate the range of her talent as she transposes herself into a variety of radically different personalities. She is sexy, she is demure, she is a weeping mass of insecurity, an almost Stepford-like housewife, and an ambitious career woman. At one point she burst into song in what people who saw her in “Summer in the Sixties” will recognize as self-parody, and she climbs on furniture and dances acrobatically. Watching her is exhausting but fun.
Set changes and transitions are often killers of otherwise good shows, but never at Harlequin – or, for that matter, never at Capital Playhouse. In this respect Olympians are fortunate to have two of the theaters that handle changes beautifully. Credit Jill Carter for both lighting and set design. Making it easy this time, the physical properties never change except for during intermission, and transitions between scenes are taken care of with some subtle but beautiful light changes and recorded music, mostly British rock. What’s not to like about interludes listening to the Beatles and Queen?
If TV sitcoms were half as good as "The Love List" I would never leave the house.
WHEN: Thursdays through Saturdays, 8p.m., Sundays 2 p.m. through Oct. 22
WHERE: State Theater, 202 E. 4th Ave., Olympia
TICKETS: prices vary, call for details
INFORMATION: 360-786-0151; http://www.harlequinproductions.org/
Note: Harlequin’s production of “Cyrano de Bergerac,” previously scheduled for this time, has been postponed until a later date due to a serious actor injury shortly before rehearsals were to begin. Tickets for Cyrano will be honored for the “The Love List” without making any exchanges. Same seats, same performance.
Posted by Alec Clayton at 1:04 PM

Not to mention the interesting homo-erotic back beat in this story of two guys who have failed in the hetero world, and are left to only imagine their resolution.

I still don't get it why people post comments anonymously, but at least this one was positive and expressed an interesting point of view.

I pretty sure you saw Ryan first in "Plaza Suite" at OLT.

You're right about Plaza Suite. I totally forgot.