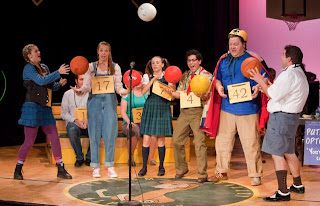 ‘25th Annual Putnam County Spelling Bee” at Tacoma Little Theatre is a delightful musical comedy with just a touch of the risqué.

The book by Rachael Sheinkin, winner of the 2005 Tony Award for Best Book of a Musical, is anything but politically correct. Songs such as “Chip’s Lament,” which is about a teenage boy’s unexpected and unwanted erection, push the limits, but it is all done lovingly. Good-hearted fun is poked at a cast of misfits, but none of it is mean-spirited.

The spelling bee takes place in a school gymnasium. The set by Blake York is unassuming. No glitter, nothing fancy, just a desk, a stadium-style riser and a few championship banners.

The students, played by adult actors, are a bunch of misfits who can’t find acceptance anywhere else. As they struggle to spell extremely difficult words, they reveal personal quirks, fears and ambitions.

It has been said that the book of a musical is nothing more than a device to link the songs together, but this musical turns that tradition on its head. It is not the music but the acting that makes this particular performance shine. The singing and dancing is mostly passable but not exceptional. The choreography by Siri Larson, who is outstanding as Olive, is lackluster. The music is a simple piano accompaniment by Terry O’Hara. He plays nicely and keeps it unobtrusive, which is fitting.

It is the comic bits between the songs that make this play a joy to watch – that and the antics of some of the actors. This cast brings everything they have, throwing themselves wholeheartedly into their parts.

Terry Thibodeaux as Barfee is hilarious. His facial expressions and hunched-over way of walking make him look like a garden gnome. The way he expresses his disgust when people insist on pronouncing his name “Barfy” is endearing. He has a weird way of spelling invisible words on the floor with his “magic foot,” which is the one thing I wish he would do with bigger movements. I’ve seen that bit done much better, but I can’t complain because he does everything else so wonderfully.

Chris Serface as the insanely lovable Coneybear is over the top in the very best way. He has proven in many other shows that he has a wide repertoire of voices at his disposal. The one he uses in this show is one of his best. Suddenly, without warning and as if some alien creature has inhabited his body, he goes into a trance. With a deep, robot-like voice, he correctly spells words he can’t even pronounce.

Alex Smith displays nuanced and wide-ranging acting skills as Vice Principal Douglas Panch, who tries mightily to keep his volatile emotions in check, but fails to do so miserably and comically. Panch might stay primarily in the background, but he certainly is never lost. He becomes a focal point at all the right moments through Smith’s subtle facial tics and vocal inflections (not to mention his sudden explosion in the second act).

Larson’s Olive, a sad but lovable girl virtually abandoned by her parents, is precious. Big eyes and dimples endear her to the audience. Her big song, “The I Love You Song” with chorus by Rona (Leischen Moore) and Mitch (Paul Eddy), is the most beautiful and heart-wrenching song in the show.

Moore is by far the best singer on stage. She shines every time she opens her mouth. She also does a very fine job of acting as probably the most realistic and believable character in the show.

Eddy shows a range of emotions as the tough guy who consoles all the losers. He doubles as one of the two dads of Logainne Schwartzand Grubenierre, a.k.a. Schwartzy, and as Olive’s father, and along with Moore and Larson is one of the better singers on stage.

One of the more unusual aspects of Sheinkin’s script is that it allows for ad-libbing and the insertion of topical references.

Also unusual is the manner in which they bring in audience participation. Have no fear, they’re not going to jerk you out of the audience and humiliate you. Each night, they choose four audience members before the show to take part in the spelling bee. This is done with their full consent and cooperation. You never know what these audience members are going to bring to the show, but it can be a fun surprise.

Watch for reviews of “Brighton Beach Memoirs” at Capital Playhouse and “Late Night Catechism” at Centerstage - coming soon.
Posted by Alec Clayton at 9:38 AM