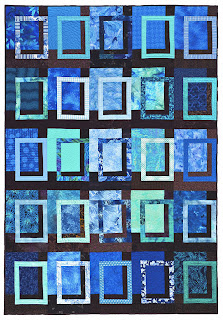 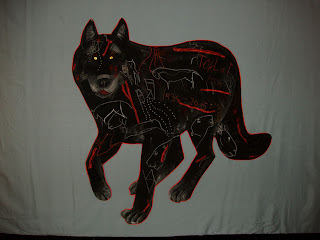 It's back! The Northwest Contemporary Art Quilt Invitational at American Art Company. I used to look forward to it every year, and then they quit holding this show for about three years. Now it's back and more colorful than ever. And I mean that literally. Unless my memory is faulty, I'm sure there are many more very brightly colored quilts in this show than in previous ones. I don't know if that's because quilt makers as a whole are getting bolder with their color choices or if it's just a product of the particular choices made for this show. Either way, there are quilts in this show that are so brightly colored you almost need sunglasses in the gallery.

For instance, Marie Jensen's "Blue/Yellow" and Melisse Laing's "Let the Sunshine In" are practically on fire. Jensen's piece is a particularly effective balance of two vertical rectangles in brilliant blue and yellow separated by a thin band of what (from a distance) looks like dirty brown but turns out to be (upon closer inspection) a bunch of feathery threads in various tones of blue, green and orange that clump and project out from the surface.

Rough and loose threads that stick out from the surface such as in Jensen's piece show up in a few other works, most notably Toot Reid's "September 28, 2010-March 8, 2011" - probably the most outstanding quilt in the show. The title refers to when Reid began working on this quilt and when she finished it. Reid titles all of her work this way. This one took a little over five months to finish. It's a strong design, employing bands of different colors in patterns similar to stacked bricks on three adjacent panels emulating the texture and color of brick and stone. Every inch of this strong pattern of repetitive rectangles is covered by a field of loose threads creating a marvelous contrast between delicacy and strength.

Readers might remember Reid from my review of another show at American Art Company back in February. Another familiar name may be Nancy Erickson who has been in most, if not all, of the quilt shows at American Art. She's been around quite a while. I even remember her from the old Penny Loucas Gallery. In this show she has an amazing quilt called "Black Wolfe" that is in the shape of a wolf. The surface is black with drawings made of stitches in white. The surface looks like a black board and the drawing in thread looks like chalk. It's really an amazing piece. OK, the wolf image may be a little corny, but the chalky drawing is terrific.

Johnston's piece looks to be either hand painted or dyed in brilliant tones of purple and orange, and she has another piece in which thread mimics the look of brushstrokes in Japanese paintings. I don't much care for the colors or design, but the brushstrokes are amazing.

"Winged Victory" has a great use of positive-negative spatial interaction, and Carter's "Nest" looks like a watercolor painting of a bird's nest with some wonderfully subtle colors and delicate lines.

"Metropolis" is one of the two or three best pieces in the show. The blues in this piece glow marvelously and there's a nice use of three-dimensional illusion in the floating frames. You'll have to see it in person to get the floating effect.

I'm very happy that this quilt invitational has returned. Let's hope it will be an annual event.