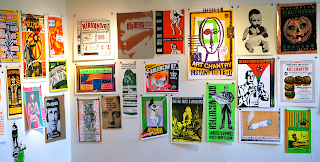 
"Art Chantry is a freaking legend."

That's the opening line from an article in the Portland Mercury.

Chantry practically invented the poster art and album cover art associated with grunge. He's done album covers for Nirvana and Hole, and posters for Hempfest. His art has been shown in the Rock and Roll Hall of Fame, Museum of Modern Art, Seattle Art Museum, the Smithsonian and the Louvre - or so says Wikipedia, and who am I to question such an authority? Right now, under the title Parkland is Burning, you can see a large selection of Chantry's work at Fulcrum Gallery.

Don't let this opportunity pass you by.

Inside Fulcrum there are three rooms loaded with Chantry's posters, representing 40 years of his art. You've probably seen many of these posters before, but probably not all at the same time, and never grouped together like this. Unless you are a fanatical collector I can almost guarantee you'll see many of Chantry's posters in this show that you've never seen before.

The best of this show is the back room, which is usually set aside for performance events at Fulcrum and seldom for displaying art. In this room we see not only some great posters, but the mechanicals the artist used to create them. Here you will see a poster for Chantry's show at the Seattle Art Museum in eight stages, as each color was printed separately. And you'll see four versions of the same poster in black and white with images from various sources - trashy magazines, ads and so forth - collaged onto clear plastic sheets.

Chantry's art is all about finding trashy images that border on offensive, often with implied - but seldom explicit - sexual connotations, and combining them with words in startling and effective ways. But let's face it: when you're advertising rock bands with names like Nashville Pussy you don't have to stretch much to border on offensive.

Yes, many of Chantry's posters are offensive as hell. He's the John Waters of poster art. Yet I can't recall seeing a single image in this show that includes total nudity or explicit sex or violence.

Chantry's posters are rough and gritty. They're designed to shock and titillate. Like, for example, the poster for a rock show featuring The Gits. It's a grainy black and white picture of Bill Clinton and Al Gore, shirtless and arm-in-arm with black bands over their eyes, looking like a gay couple on a muscle beach. Or like what may be the most famous of all Chantry's works, the safe sex poster with a photo of a cop holding a condom and the legend, "I take one everywhere I take my penis!" Both are part of Fulcrum's current Chantry exhibit.

Blank staring eyes are a common theme in Chantry's posters, eyes that are sometimes reduced to a round gleaming light. Very strange and hypnotic, like in the Breeders posters on display that features not only the staring eye but a face with a wonderfully bizarre haircut.

Chantry's colors are lurid; the images and the lettering are crude looking. There is nothing in an Art Chantry poster than can be considered pretty or elegant in any classic sense of those words. But they are art, and provocative, entertaining art at that. Not to mention that seen in a show like this they offer a look at the history of the past half-century, with an emphasis on Northwest culture.
Parkland is Burning