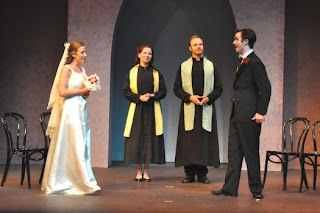 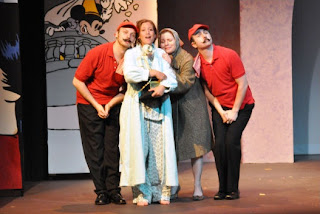 “I Love You, You’re Perfect, Now Change” at Renton Civic Theatre is a series of comic vignettes, most set to song and dance, about the many pitfalls of love, dating and marriage. Though it loosely follows the progression of first meeting through dates, marriage, separation and even a funeral, it doesn’t tell one complete story. Instead, it opens a series of windows into the lives of a variety of people in or looking for love.

Renton’s version boasts all the right elements; great production values, directing, music and acting. By rights it should have been a stellar experience, and yet…

I’ll get to the problems later. First, let’s start with all that was right with this musical, and frankly, there’s a whole lot of that.

Christopher Nardine, well known as an outstanding choreographer and director, handled both in this production, and beautifully. Dance and movement sequences were outstanding, and the directing delivered a well oiled series of cleverly mounted mini-plays. There was a minor pacing challenge; in theatre circles we say “some air could have been squeezed out of the production,” but that’s a problem common to opening night that often corrects itself later.

Part of the between-scene pacing most certainly had to do with the vast wealth of costume changes. The actors in each vignette portray different people, so there are dozens of costumes, by Rachel Wilkie, so well suited to the scene and actor that you frequently forgot they were costumes.

A simple, attractive and functional set by Mad Dog Productions worked well as a backdrop to more than a dozen skit locales created through furniture and props by Cheryl Olin. Sound and lighting (Jay Biederman and Bill Huls respectively) were good enough to be professionally unobtrusive. Musical director Cathy Blecker rose to the occasion using just two outstanding musicians; Tyler Reilly on violin and Jennifer Greene on keyboards.

An ensemble cast of two female and two male actors (Adrienne Grieco, Jennifer Littlefield, Matt Posner and Casey Raiha) adroitly handle a wide range of wildly different characters, singing and dancing their way through sometimes poignant but mostly comic relationship situations. Their comic timing on a wealth of very funny lines was spot on, a tribute both to their acting and the directing. Singing, dancing and acting were all excellent. Musicals sometimes sacrifice good acting for good singers, but that was not the case here.

Some vignettes stood out in particular for their excellence.

In “A stud and a babe,” Grieco and Raiha portray two painfully geeky hopefuls on a first date in a way that’s both endearing and almost painful to watch. Posner pairs with Grieco for “Tear Jerk,” in which he is forced to watch a “chick flick” on a date, with nearly humiliating results.

The entire ensemble in “I’ll call you soon” morphs a nervous phone wait into a surreal romp with mustachioed, costumed, dancing pizza delivery men. Posner in particular soars in the touching ensemble piece “Shouldn’t I be less in love with you.” Raiha and Littlefield, creating two geriatrics meeting at a funeral, were weirdly reminiscent of Arte Johnson and Ruth Buzzi in the dirty old man sketches from “Rowan and Martin’s Laugh In.”

Perhaps the high point was a solo performance by Grieco, where she soared through a range of perfectly nuanced emotions and outbursts as a recent divorcee addressing the camera in “The very first dating video of Rose Ritz.” It was pure acting at its finest.

So, how did all these wonderful elements combine to generate something that made me hesitate to rave? Very simply, it’s the property. First presented in 1996, there are two problems with it. The first is that although it is all about love, there is a rather powerful thread of cynicism that runs through it, as though written by someone who’d gotten the short end of the stick both recently and often.

The other problem is that every relationship sitcom from “The Love Boat”  to “Sex and the City” has dealt with these same situations, and frankly, that’s made them a bit trite and predictable. Granted, many are presented more slickly here, but as my wife and co-reviewer commented, “the property seems just a bit past its ‘sell by’ date.”

Should you go to see it? Absolutely, but approach it not as a play delivering some life changing message, nor one designed to leave your emotions either twisted or uplifted beyond the pale. Instead, let the humor, song and dance wash over you and you’ll have a very delightful two hour escape.

“I Love You, You’re Perfect, Now Change”
September 9 to September 24, 2011
Renton Civic Theatre
http://www.rentoncivictheater.org/
Posted by Alec Clayton at 11:59 AM