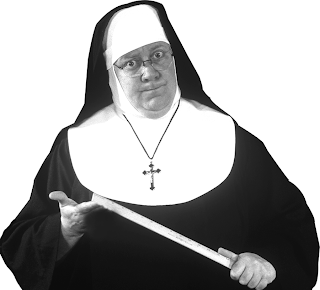 "Late Night Catechism" at Centerstage
by Michael Dresdner
Photo courtesy Centerstage
Let’s start with a disclaimer. I’m not Catholic (in fact I was raised Jewish), but that in no way diminished the pleasure and hilarity that “Late Night Catechism” at Centerstage offered me. It was a delightful experience from beginning to end, an absolutely laugh-out-loud funny evening.
Skillfully written in 1993 by Maripat Donovan and Vicki Quade, “Late Night Catechism” is technically performed as a one woman show. However, it’s done as a catechism class, though in the spirit of hilarity rather than stern seriousness. The “Sister” who teaches it uses the audience as the class attendees, and thus as part of the cast, in a sense. That means lots of interactive improv on her part and lots of audience participation, usually willingly, on ours.
Because Sister is responding to and working with the audience, the play will be different each time you see it. Personally, I’d love to go back and have another round, and I’ll bet you’ll feel the same way.
Catechism holds the distinction of being the longest running comedy in several cities, including Seattle. There’s good reason for that. While the actor, ostensibly a Catholic nun and garbed accordingly, pokes fun at Catholicism in the guise of explaining its rules and peculiarities, it’s done so gently and adroitly that no one, least of all the Catholics in the audience, takes offense.
This Centerstage iteration is not community theatre, what we usually review here, but rather a traveling professional show from Entertainment Events, Inc. The nun in this run is played by Nonie Newton-Breen, and it is hard to imagine anyone doing a better, funnier job of it. An Irish Catholic herself, she’s an alumnus of the famed Second City Theatre as well and boasts a host of other live and screen credits.
The simple but effective set is a typical 1960s classroom at a Catholic school, replete with blackboard (which she uses), pictures, a ruler (of course) and even a dunce chair (which she also used the night I was there.) She conducts class in the normal way, asking the students (audience) questions, and providing, as is appropriate, answers, asides, jokes, stories, explanations and even some supercilious chiding when she’s lucky enough to tap into inappropriately dressed “students,” lapsed Catholics and those benighted souls who think they actually know their catechism. Newton-Breen is so very good at this that she manages to tweak the withering nun demeanor into something hilarious, even for her victims.
There’s only one thing I’d have changed. After the intermission (recess?) she opened the class to any questions they had about Catholicism. The ensuing exchanges are delightful, but it is obvious she knows the real answers. Without advance warning, many of us responded like deer in the headlights, and only thought of great questions after it was too late. It’s a pity; her skill would have made superb comic fodder out of even the most arcane or intentionally disruptive questions. She’s that good.
Come see “Late Night Catechism,” but come prepared with good questions for the second act. You will thank me.
Now say three Hail Marys and two Our Fathers as penance for having missed opening weekend.
Late Night Catechism
Sept. 23rd through Oct. 9th 2011
Centerstage Theatre  www.centerstagetheatre.com
Posted by Alec Clayton at 4:50 PM