Part 2 - Imprudent Zeal
For almost five years Gabi and I lived in and worked for an organization in New York called Everything for Everybody. We met there, and we got married there. I was 31 and she was 21. EFE was in an industrial building in the heart of the meat market district in Manhattan. If we went outside early in the morning we had to duck swinging carcasses going in and out our door.
We fed street people, housed the homeless, accepted and gave away donated clothing, toys and household items. We helped people find jobs and apartments and friends. We published a newspaper and threw parties, and Gabi and I slept on a loft bed in the back of the “store.” EFE was open 24/7 and worked in shifts with a staff that varied from half a dozen to a dozen people at any given time. 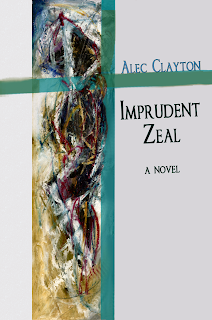 The guy who ran the place was a recovered alcoholic and a former seminarian who had been kicked out of the seminary for what the fathers called Imprudent Zeal – the final straw being when he pamphleteered against Joseph McCarthy’s Communist witch hunt.
For years after we left I wanted to write the story of Everything for Everybody, but when I attempted to write about it, it didn’t ring true.
When Gabi studied film and video in college she had to write a pilot for a TV series, and the idea she came up with was based on Jack Scully, the founder of EFE. Her twist on the real story was the main character was Jack’s daughter. He never actually had a daughter. She suggested I take that idea and use it for a novel.
I created a character named Scully McDonald based on Jack. I made up an imaginary childhood for him growing up in Albany, where he was a Golden Gloves boxer (Jack had never boxed, but I had, and I patterned the one boxing scene in the book on a match that I lost embarrassingly.) I made up stories about him joining the army and fighting in the Korean War and coming back home emotionally shattered after seeing his best buddy get blown to bits by a land mine. He became an alcoholic and fathered a child with a prostitute named Becca, but he never knew Becca was pregnant. She left New York and hitch-hiked cross country, eventually settling in Seattle, where her daughter grew up to be an art dealer.
In a parallel story, a young man named Lane grows up in Hattiesburg, Mississippi, where I lived from the age of 12 until after graduating college. Lane moves to New York where he stumbles upon Everything for Everybody and goes to work there, and there he meets Scully’s daughter, McKenzie, who has found her father after many years and is visiting him from Seattle, where she runs an art gallery.
This book has some complicated plotting with people from all over the country being brought together by coincident – something that is questionable in a novel but which happens all the time in real life. It’s also the closest I’ve come to writing an autobiographical novel. Way too much of Lane’s life is based on my life, and the chapters dealing with EFE are absolutely true. Only the names have been changed. On the other hand, Becca and McKenzie are completely made-up characters, and Scully’s life up until the founding of EFE is completely imaginary.
I have to thank my old friend Margaret Ward for her help on this book. I sent her the manuscript chapter by chapter and she went through it line-by-line correcting my grammar and suggesting changes here and there.
Here’s a quote from Lew Hamburg’s review in The Olympian: “This book is the great circus train wreck that was America from the 1950s to the 1990s. It moves not only in time, but also in space, from the Deep South to New York City and Seattle. This landscape is populated by artists, art gallery owners, possible saints and a prostitute redeemed by the love of a good man… More coincidences than a Dickens novel, but smoother and more believable.”
For more reviews and an excerpt go tohttp://www.claytonworkspublishing.com/imprudentzeal.html.
Posted by Alec Clayton at 9:21 AM

I've ordered from Amazon and look forward to reading it.

Thanks, Jim. I do edit, and edit and edit. I think I actually enjoy the editing process more than the initial writing.