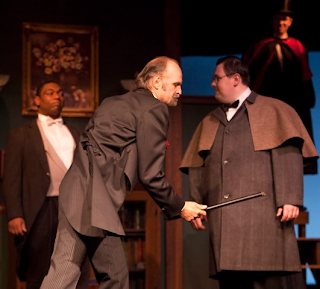 Mark Peterson, Micheal O'Hara, Blake R. York,
and in background Niclas R. Olson in "Dr. Jekyll and Mr. Hyde"
at Tacoma Little Theatre. Photo by Dean Lapin.
This is the last weekend for “Dr. Jekyll and Mr. Hyde” at Tacoma Little Theatre. If you’ve not seen it before, know at least this much: horror can be beautiful.
This adaptation of Robert Louis Stevenson’s horror classic bears little resemblance to the novel and even less resemblance to any of the many cheesy film versions. Adapted for the stage by Jeffrey Hatcher (“Murderers,” “Tuesdays With Morrie”) it’s Jekyll and Hyde updated for the 21st century. It’s stylish and macabre, with an emphasis on the complex psychology of the good doctor (no longer so good) and his evil other self.
Brett Carr’s set and lighting are essential to the uniqueness of this production. The set blends an abstract evocation of London in 1883 with beautiful and realistic details of a Victorian era drawing room with rich and velvety browns and greens on the walls and in the furnishings. Jekyll’s elegant home transforms itself into a starkly industrial looking surgical dissecting theatre and other sets. The lighting is moody and dramatic. All set pieces are on wheels and they roll around in smoothly choreographed fashion as actors enter and exit the stage. I have often said that set changes can make or break a play - there is nothing so irritating as long and cumbersome set changes to destroy the mood and flow of the action. In this play the set changes are like a highly stylized ballet that enhances the mood. Only once was there any noticeable disruption in the flow. It was in the opening scene opening night when a door is broken and then the broken panel is replace in the dark during the transition to the next scene. There was a little noise and a delay of a few seconds.
Another unique thing about this show is that there is not one Hyde but four distinctly different Hydes played by four different actors, one of whom is a woman. They are: Mark Peterson, Blake R. York, Niclas R. Olson and Jennie Jenks. Each of the actors playing Hyde also plays multiple other characters. Without any appreciable changes of costume or makeup other than the addition of capes, top hats and a cane, all of these Hydes convincingly become various other characters such as a doctor and a police inspector and a house servant. And as an ensemble they collectively become an eerie kind of Greek Chorus as two or three Hydes stand behind the other Hyde and mimic his actions with quiet hisses and growls and threatening gestures. It is in these scenes that the Hydes are most menacing – especially York and Jenks whose faces almost become Halloween masks at times. I’ve seen both of these actors in other plays, but I’ve never seen them transform themselves so effectively.
Olson looks too young for the characters he plays, Hyde, Lanyon and others, although I must temper that by saying the age of these characters is never explicit. Olson is outstanding as Lanyon, but less effective as Hyde. His Hyde is more a parody of a Simon Legree-type than the complicated and truly evil Hyde played by the others three (dignified, proud and evil in the case of Peterson’s Hyde 1).
Nicole Lockett succeeds in making it believable that a drab charwoman could fall in love with a monster and continue to love him even when she knows he had committed brutal murder, but I wish there could have been something a little quirkier or more exciting in her personality.
Micheal O’Hara is an excellent Dr. Jekyll. He plays the good doctor with dignity and passion – and righteous indignation in his heated confrontation with Dr. Carew (York) in one of the most powerful and well-acted scenes in the play.
Background music provided onstage by pianist Leslie Foley added to the oddly romantic mood of the play.
This play is intelligent, dark and disturbing, with a dabbling of macabre humorous relief; and it is beautifully directed by Elliot Weiner, who clearly grasped the depth of Hatcher’s script and does a great job of blocking the continuous flow of actors, props and set pieces.
WHEN: 7:30 p.m.Friday and Saturday and 2:00 p.m. Sunday, through Nov. 6
WHERE: Tacoma Little Theatre, 210 N “I” St., Tacoma
TICKETS: $15 - $25
INFORMATION: 253-272-2281, www.tacomalittletheatre.com.
Posted by Alec Clayton at 9:50 AM