Worldwide youth art show at B2 Fine Art
The Weekly Volcano, Oct. 20, 2011
“Beyond Crayons & Finger Painting 2.0,” the second annual art project at B2 Fine Art features 75 works of art from Africa, Canada, China and the United States, all created by youth ages seven to 19. The overall inventiveness and technical quality of the work puts to shame work I’ve seen in student art exhibits at area colleges. 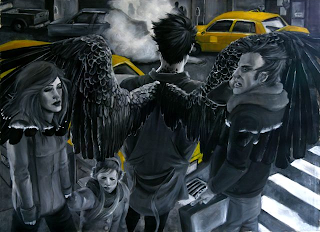 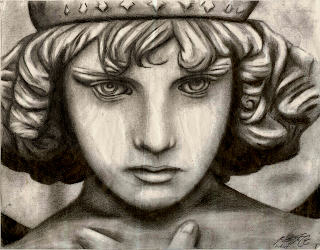 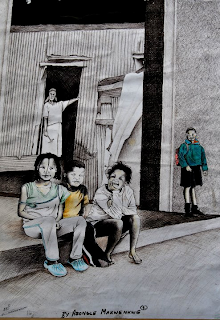 Pictured from top" “The Hidden” by Rebekah Slusher’s, "Serafina" by Nathaniel Santa, both from Tacoma, and and untitled drawing by Abongle Makwenkwe from George, South Africa
All of the American artists in the show hail from Western Washington, most from Tacoma and a handful from Seattle and Bellingham. The works from Africa come from George, South Africa, and because of some kind of conflict in George there were no identifying wall labels on any of the African art, but gallery owner Gary Boone said they expect to remedy that soon.
Boone pointed out an interesting difference between the art from South Africa and that from China. The Chinese art was all up-beat, colorful and joyful in outlook. Most of it was Animé influenced. There was no regional look to it. No recognizable Chinese people or culture or architecture.
The Chinese entries were all happy fantasy pictures such as “Partner” by Li, Linghan, a delightfully sweet picture of a man with a camera and backpack rowing an alligator as if it were a boat, while on shore a man with binoculars rested in a hammock strung between two giraffes and a women rode a basket carried by a stork. Very fun. But this and the other Chinese drawings had no connection with their culture. It’s as if they’ve been programmed to put forth a happy face.
The African art, on the other hand, presented a more realistic picture of their culture and was much more varied in style and content. There are paintings and drawings of animals, scenes from the city of George, and other works that show the strifes and aspirations of the people of South Africa. One of my favorites is a piece by Abongle Makwenkwe that shows a group of children on a stoop in the city and seems to present a true feel of what it must be like to grow up there. Interestingly, the artist employs the device of using spots of color in a black and white composition, a device also used by two Tacoma artists, Rebekah Slusher and Lydia Fordice.
I don’t want to start chanting “U.S.A, U.S.A,” like some crazy nationalistic sports fan, but I must call attention to the hometown work. It was uniformly excellent despite a certain amount of clichéd imagery, which I think we can chalk up to youth and inexperience.
I was amazed at 11-year-old Maleah Bishop’s “Native American Winter Rug.” Her technique and material was something I’ve never before seen: photography kaleidoscope collage on faux suede textile.
One of the most dramatic works in the show is Rebekah Slusher’s acrylic painting “The Hidden.” It is a street scene in tones of gray with the only color being two yellow taxi cabs. It looks like a photograph taken from a strange angle that condenses a large scene into a tightly cramped space.
Lydia Fordice’s surrealistic pencil drawings are imaginative and technically superb. Like Slusher (I was told they are friends, and I suspect they influence each other) she uses spots of color within tones of gray to heighten the dramatic effect. In this case slashes of bright red and splatters of a duller red like dried blood. These drawings are dark and disturbing, but beautifully executed.
Also very impressive were a group of three drawings by Nathaniel Santa, all taken from Renaissance art. His portrait of “Beatrice Portinari” is taken from a painting by Dante Gabriel Rossetti, and there’s a skillful copy Da Vinci’s “Battle of Anghiari” and another portrait of a woman named “Serafina,” which is a piece derived from a photograph of a statue in Italy. All three are skillfully drawn. Now I just hope we can look forward to the day this young artist starts applying his amazing skill to his own original compositions.
[B2 Fine Art Gallery, 11 a.m. to 5 p.m. Thursday-Saturday, till 8 p.m. Third Thursdays, through Nov. 30, 711 St. Helens Avenue, Tacoma, 253.238.5065]
March 12th - April 19th
Posted by Alec Clayton at 1:04 PM

To Alex Clayton,
In 2011 you did a excellent review on two of my pieces and the critique has inspired me even more. I have had my art in B2 gallery since I was ten and only until 2013 have they decided not to do the kids thing. I don't want to wait and I don't want to judged by my age, only being a young teen. I fear galleries will reject me for my age and no one pays much attention to kids art. I wish you to take a look at my art website and critique it and maybe publicize it and give your opinion. the link to it is http://enterdigitalart.weebly.com/
Thanks Maleah,