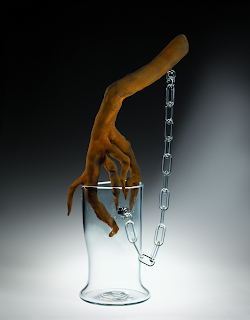 "Branch." A piece by Richard Craig Meitner with the assistance of Richard Price and Edwin Dieperink Courtesy/Collection of The Corning Museum of Glass, 2005.3.65, gift of Barry Friedman Ltd.


When my wife saw a photo of Richard Craig Meitner's "Branch" - blown glass with rust patina - she said, "That's creepy but interesting." She paused a moment and then said, "I like it."

That reaction may be typical for Meitner's work. His glass sculpture can be witty and perhaps a bit strange, but never boring. And I can see the creep factor in some of them. He speaks of his work as being magical. "Magic," he says, "is a moment in which something happens that does not fit into your belief system."

Japanese textiles, German Expressionist graphics and science are among many eclectic inspirations for Meitner's work. There are a lot of unusual juxtapositions of imagery from the natural world and the world of science. There are human and animal figures combined with simple abstract forms. There are figures that morph into other things. There are forms from nature and science combined with traditional glass vessels or - in some of the more interesting pieces - big plywood boxes with decorative tiles glued to the surfaces.

Epitomizing the famous quote by Le Comte de Lautreamont, "As beautiful as the chance encounter of a sewing machine and an umbrella on an operating table," Meitner's work is all about the juxtaposition of disparate objects. In Branch, the piece mentioned in the opening, a form like a gnarled tree branch with a rust patina, which also looks like a man's hand, reaches into a clear glass vessel, and the two unrelated objects are chained together. The chain is also clear glass.

The rust patina shows up in many other pieces, often in combination with a classical glass form. "Gione" from the series "For Everything There is a Season" has a form that can simultaneously be read as a male figure and a teapot. This man-teapot has a surface of rust patina, and it sits on top of a box of decorative tiles. The contrast is startling, and the many possible interpretations are fascinating.

Among my favorite pieces are a number of clear or translucent glass vessels with quirky drawings on the surface. Many of the drawings look like bugs, and some are drawn both inside and outside of the glass, which means you see them in various degrees of translucence.

I also like a number of works that look like beakers and test tubes and other instruments out of some mad scientist's laboratory.

Meitner often works in collaboration with other artists who are credited in the wall labels. "Gione," for instance, was created with the assistance of Richard Price and Edwin Dieperink.

The Meitner show is in one of the interior galleries at MOG, so you can't find it without wandering through some of the other galleries. Maybe that's a good thing. It forces you to look at some of the other shows, which are worth seeing or seeing again.

Meitner will be a visiting artist in the Hot Shop July 14-18.