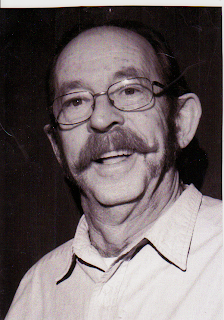 I’ve been a Dennis Rolly fan since I first saw him perform with the Washington Shakespeare Festival back in the early 1990s. He seems to specialize (to be typecast) in playing some of the more quirky roles in Shakespeare plays as well as in contemporary dramas and comedies – meaning that for a guy who is often typecast he is pretty damn versatile. His range and passion as an actor is amazing.

Dennis is well known in the Olympia area for his many performances with Harlequin Productions, but some of his more exciting roles in recent years have been in lesser known productions – as the immortal Leporello  in the hilarious comedy “Don Juan in Chicago” at the Midnight Sun performance space and as Marley in “Jacob Marley’s Christmas Carol” at Olympia Little Theatre.

Now he takes on a more sedate role as “the author” in the reading from my novel Reunion at the Wetside. When casting for the reading, Dennis was my first choice for the author, and I was overjoyed that he accepted my invitation. Essentially he’s the narrator, a story teller; i.e., he’s playing me, the author of the book. He provides the exposition that sets up the dialogue -- a necessary evil because Reunion at the Wetside was written as a novel and not a play. In lesser hands his part could be boring, but in our one and only rehearsal and in our recent reading at Orca Books, Dennis’s narration was the spark of life to the story.

Please come to Comic Book Ink in Lakewood on March 21 to hear Dennis and a fine cast of actors in this brief reading.

A Q&A and book signing will follow the reading.
Posted by Alec Clayton at 9:00 AM

Don't forget his killer Polonius and Gravedigger in Free Hamlet, directed by some guy!