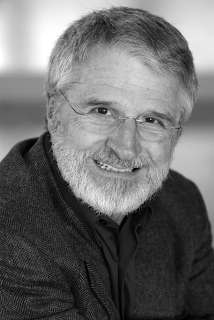 For some reason I envision Jim Patrick as a British actor. Why is that? I don't know. Something about his carriage and demeanor. He is dignified no matter what role he's playing, and I've seen him in a number of roles, most recently in "Carl Sagan's Contact" at Centerstage in Federal Way and most memorably in "Amadeus" at Lakewood Playhouse and doing a silly running joke of a song in "Broadway's Fabulous Fifties" at Tacoma Little Theatre.

I've noticed that in programs he is usually listed as James Thomas Patrick, a moniker that seems to fit his dignified looks, but I like him as plain Jim -- especially as Jim Bright, the hero of my novel, Reunion at the Wetside. Jim Bright is one of the more complex characters I've ever written. He's a liar and something of a nasty jokester, and his politics are diametrically opposed to everything I believe in; yet there's something inherently likeable about him -- so likeable, in fact, that the smartest and most decent woman in the book falls in love with him.

In the one reading we've already done Jim played that Jim beautifully. I think he even looks the part, (voted most handsome in high school many years ago). While looking the part is not necessary in a staged reading, it doesn't hurt.

I invite you to come see Jim Patrick and the rest of the fine cast interpret selections from my book.

And by-the-way, Jim is not British. He's from San Francisco.

A Q&A and book signing will follow the reading.
More information on the book including reviews and an excerpt for you reading pleasure at  http://www.claytonworkspublishing.com/Reunion.html
Posted by Alec Clayton at 11:21 AM