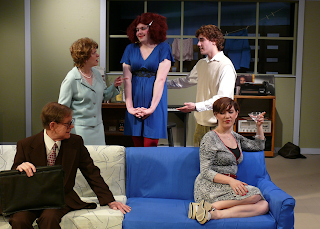 “Love, Sex & IRS” at Olympia Little Theatre is a modern farce with all the classical elements plus a few: mistaken identity, pratfalls, improbable situations and cross-dressing. The 1979 script by William Van Zandt and Jane Milmore has as many ups and downs as a roller coaster ride, and the lead actors (with notable exceptions) are equally uneven.

With seating on three sides of the stage, I was easily able to observe audience reactions. I saw people staring away from the action in what looked to be disdain, and then I saw those same people heartily laughing. In the end the laughter won out, and most of the audience left happily chattering.

Leslie (Justin Smith) is having an affair with Kate (Abby Wells), who is engaged to Leslie’s roommate, Jon (Jules Dellinger). That’s just the half of their problems. The bigger dilemma is that for years Jon has been filing fraudulent income tax returns claiming Leslie is his wife, and now an IRS auditor is coming. Newt Buker plays IRS man Floyd Spinner. In desperation, Jon convinces Leslie to dress in drag and pretend to be his wife.

Both Smith and Dellinger are new to OLT and relative newcomers to acting. They show promise, but they each need about a dozen more plays under their belts before that promise can be fulfilled. Dellinger is likeable as the deceptive but ultimately good-hearted Jon, but he does not fill the role naturally. He needs to relax into it more. Smith displays moments of inspired buffoonery – most hilariously when he hacks and wheezes with a strange sinus problem that affects him whenever he gets nervous. But for the most part he seems to be straining to pull off the demanding physical comedy.

Wells is a much more experienced actor with roles in previous OLT productions including “Murder on the Nile” and “Cat on a Hot Tin Roof,” and community college and independent film roles. She slips into the role of Kate so naturally that she seems not to be acting at all.

But it is two veteran actors who steal the show: Buker and Bonnie Vandver as Jon’s mother, Mrs. Trachtman. Buker is perfectly cast as the IRS auditor as he starts off seeming very mousey, officious and formal, and then relaxes and accepts an offer of a drink, and then his true self emerges: a lecherous drunk. The auditor gets some of the best one-liners in the play, and he delivers them with impeccable timing and expression. Mrs. Trachtman also gets drunk (while claiming she doesn’t drink). Her double-takes and shocked expressions are precious, and she is believably inebriated though her lurching walk may be a bit overdone. (As I said in my recent review of another farce, “A Flea in Her Ear,” everything is overdone in a farce.)

Like the play itself, reviews of “Love, Sex & IRS” have been uneven. Reviewers have referred to the time in which it is set, 1979, as a time of innocence, comparing the play to TV sitcoms of the time and using that innocence as an excuse for some of the outmoded jokes and naïveté about cross dressing and homosexuality. But 1979 was after Vietnam and Watergate and the so-called sexual revolution. I don’t call that a time of innocence. At least the gay jokes were not mean-spirited or blatantly homophobic. In fact, I think the funniest line in the whole play was a gay joke – which I will not repeat here because I don’t want you to see it coming.

Special note should be made of the props – from the choice of record albums to the TV with the bent coat-hanger antenna -- which were carefully chosen to epitomize exactly what you’d expect to see in the apartment of a pair of out-of-work young musicians in New York in 1979.

And here’s an addendum. After finishing this review, my wife sent me to an online review LOVE, SEX, AND THE I.R.S.- A Company of Faces at the Calo Theatre - by Mary Shen Barnidge as performed in Chicago in 1991. Barnidge elaborated on problems with the script that I barely touched upon, and she was less forgiving than I.
Posted by Alec Clayton at 11:13 AM