A valiant effort in ‘Divorce’ 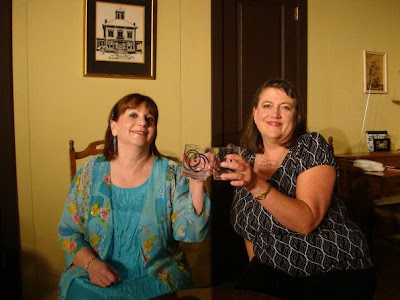 
There is something homey about community theater that invites audience members to feel like they have a stake in the performance.

When the borrowed venue for Spotlight Players’ “Divorce, Southern Style,” a church, wasn’t ready opening night because of a previous event, audience members pitched in to help the stage crew put the set together – much to the delight of first-time director Bob Yount.

There was about a 10-minute delay, and then the play got under way with only minor hitches.

The play in question is a frothy comedy by Jennifer Jarrett called “Divorce, Southern Style,” which Dramatist Play Service lists with the alternate title “Winter Chicken.” Neither title seems quite right. Although set in Charlotte, N.C., there is nothing quintessentially Southern about this play; it’s not really about divorce, and “Winter Chicken” is an even more far-fetched title.

The story is about Eleanor Bander’s ill-advised and ineffectual attempt to lure her ex-husband, Walter (John Chapman), into remarrying her 15 years after their divorce. She almost succeeds in convincing him that their marriage had been a happy one despite the fact that all they did was fight.

Two of the major roles and one supporting role were double cast. Opening night these roles were filled by Becky Condra as Eleanor, Susan Smith as Eleanor’s silly alcoholic best friend and neighbor Elma Blue Williams, and Bruce Blocher as the lecherous but good natured optometrist Dr. Fred Abernathy.

Performances by actors in the major roles are uneven, funny in spots but histrionic in others. Condra is especially good at physical comedy. She’s at her funniest in bits wrestling with a vacuum cleaner and forcing her way in between Walter and son-in-law-to-be Vince Sigmon on a crowded couch. And I love her walk as she ascends the stairs in her most alluring pose for her grand entrance the night of Walter’s birthday party. But her verbal delivery is hit or miss, funny in some places, but strained in others.

Smith has an endearing and funny vacant smile that reminds me of Alfred E. Neuman, the old Mad magazine what-me-worry character. It’s an expression that fits the drunken Elma Blue well, but it never changes – that same silly grin is plastered on her face throughout the play.

Similarly, Chapman as the ex-husband has a downturned scowl on his face that seldom changes, although he does display a fairly wide variety of emotions. His affectations seemed stiff and overwrought when he first arrived back home, but he settled into the role nicely as the show progressed.

The best acting came from Rebecca Nuce as daughter Elizabeth, Nathan Ellis as Vince, and Blocher as Dr. Abernathy. Nuce is a fiery bundle of energy, and her character is not only very likeable, but also the most believable character in the play. Ellis is kind of sweet and bumbling as the ever-faithful boyfriend who has stuck with Elizabeth through years of on-again, off-again engagement. Dr. Abernathy is one of the funniest characters in the play as an all-too-obvious, self-styled ladies’ man whose attempts to woo first one woman then another are totally ludicrous.

The smallest role is that of Walter’s girlfriend, Gretchen, played convincingly by Tiffannie Lindskog despite some very unfortunate casting. Gretchen is supposed to be a former classmate of the 50-year-old Walter; Lindskog appears to be a contemporary of the daughter rather than the father.

Cast and crew had large roadblocks to overcome.

Not only were they forced to load in the set at the last minute, which must have added immeasurably to opening night jitters, but also they had to rehearse without a complete set, thereby having to wing it in front of a live audience their first time with an actual set.

They even had to improvise, successfully I might add, around some unexpected prop malfunctions.

Given all of that, plus a script that was only mildly funny, they did a commendable job.

The play runs a little over two hours, including two 10-minute intermissions.