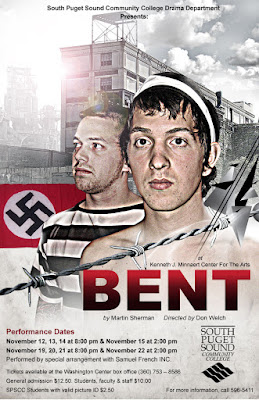 We're going to see "Bent" this weekend. I won't have a chance to review it because the last performance is Sunday, but it looks like it's going to be a great show.

Here's the announcement I got from Don Welch, the director:

In 1934 Berlin on the eve of the Nazi incursion, Max, a drifter, and his lover Rudy are recovering from a night of debauchery with an SA trooper. Two soldiers burst into the apartment and slit their guest's throat, beginning a nightmare odyssey through Nazi Germany. Ranked lower on the human scale than Jews, the men as avowed homosexuals flee. Bent, written by Martin Sherman and directed by Don Welch, is presented by the South Puget Sound Community College Drama Department and is preformed in special agreement with Samuel French INC. The play takes place at the Kenneth J. Minnaert Center for the Arts.

Tickets are $12.50 for the general public and $10 for student, faculty and staff. South Puget Sound students can purchase tickets for $2.50 with their IDs. Tickets are available at the Washington Center box office at (360) 753-8586.