Rags to riches to rags 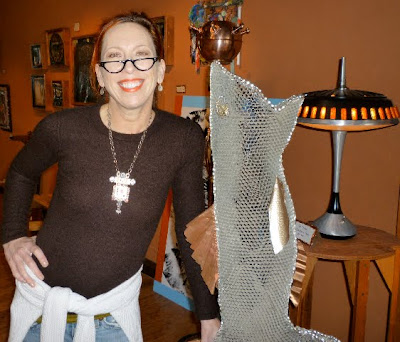 
Jo Gallaugher busted ass to get rich and live the good life of a high-salaried CEO. She pulled herself up from a small town high school dropout and single mother of two to become a successful businesswoman living in a fancy house on a golf course in California.

And then she gave it all up to pursue her dream of running an art gallery in Olympia.

Gallaugher grew up in Kennewick, Wash. At 26 she woke up to the fact that her life was a dead end. She was a single mom who had never made more than five bucks an hour, working in a gas station. She had to do something to change her life, and education was the only solution in sight. It couldn’t have been easy to go back to school and earn a BA, then an MBA, while struggling to support two growing children, but she did it.

She began her climb to the top as an accountant and then Systems Administrator for Planned Parenthood, moved on to Director of Administration for the School of Medicine at the University of California San Diego, and Vice President of Operations for Vericare, a national behavioral health firm. She was CEO for a San Diego based eating disorder firm when she realized she wanted to come back to Washington. She decided Olympia was the place to be because it had an urban feel but without all the traffic backups and other big city hassles. She now lives in Tumwater with her grade school sweetheart and opened her new gallery, Matter, in downtown Olympia in September.

“I was working a million hours. It was eating me up. All I did was work or think about work,” Gallaugher said. In making the move to Olympia, she had to purge herself of a lot of accumulated stuff and realized that what she most wanted to keep was her art and the dream of running her own art gallery. Her own collection was mostly metal art with a lot of work made from recycled materials, and she decided to specialize not in what she thought might sell, but in the kind of art she loves. She began recruiting artists last April. Since then she’s talked to about 500 artists and agreed to work with 65.

Matter features artworks “that incorporate recycled, reclaimed, and responsibly harvested materials” including a balance of functional crafts and fine art pieces. “Customers are surprised at the caliber of the art,” she says.