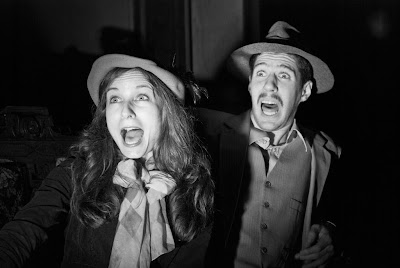 "The Turn of the Screw" and "The Uninvited"


Olympia doesn’t have a fringe theater. But it sort of does. It’s comprised of two small theater companies with lots of the same actors, directors and technical crews. They are Prodigal Sun Productions and Theater Artists Olympia. Both companies seem to thrive on blood, gore, lowbrow camp, and general weirdness. For the Halloween season both companies are doing ghost stories.

Prodigal Sun’s “Turn of the Screw” at the Midnight Sun performance space fits the classic definition of fringe theater in every way: small venue; minimal sets, lights and costumes; and an intellectually and emotionally charged story that is not geared toward popular appeal. Since I am reviewing this show for The Olympian (due out Nov. 5) and The News Tribune (Nov.6), I will keep my remarks about it brief and move on to the other show, “The Uninvited” by Tim Kelly, presented in the Washington Center black box theater by TAO.

What I would like to say about “Turn of the Screw” is that it is bare-bones theater and an acting tour de force with brilliant performances by Christopher Cantrell and Ingrid Pharris.
And now to “The Uninvited.” It is a much more elaborate production than is normally associated with fringe theater, with the facilities at the Washington Center allowing for more professional sets, lighting and special effects. It is fringe in attitude only.

Written in 1979 by Tim Kelly and based on the 1942 melodrama by Dorothy Macardle, TAO’s version of “The Uninvited” is presented as a parody of early radio dramas and horror movies. (Enter irony here: The way to parody melodrama is to present it not as parody but simply in the way melodrama has always been presented.)

The set by T.S. Samland, who also directed the play, is the drawing room of an old English country home, with a semi-circular backdrop and rich furnishings. Lighting by Kate Kennedy, costumes by Christina Hughes and sound by Aaron Ping add to the period feel. A dramatically lighted portrait of the recently dead woman of the house is hilariously hokey. The only thing that could have been better would be if sets, costumes and makeup mimicked the tones of a black and white movie.

The main characters, Rob Taylor as Roddy Fitzgerad and Michelle Garayua as his sister, Pam, play their parts straight. No exaggerations, no embellishments. Many of the other characters, by contrast, are caricatures — the crotchety old man (Tom Sanders), the nosey neighbor (Pug Bujeaud), the eccentric artist (Robert McConkey), and best of all the haughty Irish maid (Jenny Greenlee).

In serious drama good actors seem not to be acting at all; but in this play they make a point of acting. Sitting in the audience you get the impression that these actors are lampooning the act of acting and getting great kicks out of playing off each other. This was especially noticeable when Greenlee and Bujeaud were together alone on stage. After they made their exit I imagined they were laughing like crazy backstage.

“The Uninvited” can be a lot of fun to watch if you don’t take it too seriously.

I went downtown, saw Katie in the nude
on Common Avenue, detracted soltitude
as it were, like a dream-state rosely hued,
like no one else could see her; DAMN! I phewed;

was reciprokelly then, thank heaven, viewed,
bestowed unique hard-on! but NOT eschewed,
contrair-ee-lee, she took a somewhat rude
'n readidy attude of Sex Prelude; it BREWED!

And for a start, i hiccuped "Hi!", imbued
with Moooood! She toodledooed: "How queued
your awe-full specie-ally-tee, Sir Lewd,
to prove (alas!), to have me finely screwed,

and hopef'lly afterwards beloved, wooed,
alive, huh? Don't you even DO it, Duu-uuude!"

Feel free to announce your blog on mine.