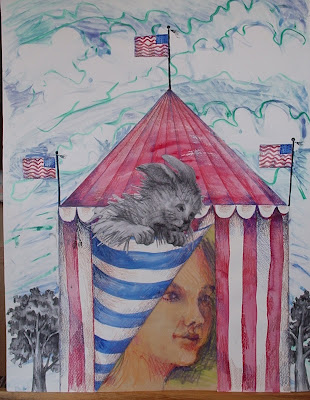 Faculty shows its stuff at SPSCC – with mixed results

Published in the Weekly Volcano, Nov. 26, 2009
Pictured: "She Walked a Tightrope," a charcoal and mixed media drawing by Carol Hannum

I was not exactly thrilled by the faculty art exhibit at South Puget Sound Community College. That’s not to say it’s not worth seeing. There are some very nice stoneware pots by Colleen Gallagher, Jane Stone and others, and some interesting mixed-media drawings by Carol Hannum. But overall the quality of the work seems tentative and sketchy. Even Shaw Osha, a painter whose work I admire a lot, is a big letdown in this show.

Hannum pretty much carries all the weight in this show. The main wall as you enter the gallery is filled with her drawings — eight of them in charcoal and mixed media (some collage and what appears to be watercolor and pencil). Most of these drawings look like children’s book illustrations, and a lot of the titles read like chapter titles or captions for illustrations. Not being a connoisseur of children’s literature, I can’t say if they’re from actual stories or not. Maybe she’s writing a book or illustrating one for a friend.

The drawings are sketchy, with crude line and shading — whether intentional or not, I can’t tell. A childlike quality would be appropriate, but maybe she’s just not a highly polished draftsman. Images are put together in a collage manner with pictures of people, animals, and the settings in which they are placed juxtaposed in random order, often stacked tightly with foreground figures looking like they were stuck on in front of background images creating a claustrophobic and almost haphazard feel that is probably intentional.

The more I think about it the more I think that all the things about these works that can be off-putting (the cramped spaces, the less than polished style) add to their expressiveness.

Two of the best are "No Country for Old Bunnies" (an obvious takeoff on the Cormac McCarthy novel) and "Family Portrait." The family in the portrait is a family of rag dolls “pasted” in front of a pencil drawing of a dog (maybe it’s a dog doll). The bunny in "No Country" is drawn with charcoal; behind him are towering evergreen trees. Both drawings utilize a contrast of black and white images juxtaposed with color images, mostly reds and blues.

She is also showing a couple of handmade books with accordion pages and nice ink drawings, which give more evidence of drawing skill than the mixed-media drawings.

Other artists of interest include ceramicist Joe Batt, who is showing a group of small figures of cartoon creatures in stoneware “painted” with colored pencils. (I wonder how permanent the color is and whether it was applied before or after firing.)

There are also four large charcoal and pastel drawings by Melinda Liebers Cox, ceramics by Sequoia Miller and Robin Ewing, two charcoal figure drawings by Gallagher, and the one oil on paper by Osha. (Almost a year I noted that Osha seemed to be branching out in new directions that I thought were promising, but the painting in this show is headed in a doubtful direction.)

A final note: I’m not a huge fan of ceramics. Unless they strike out in radically inventive directions, a pot is just a pot. The ones in this show may represent the most accomplished art in the show, which seems to highlight the impression I got that the art department at SPSCC must be geared toward hobby artists.