Gumpert and Anderson at Childhood’s End 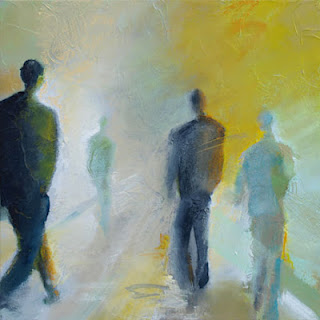 Chuck Gumpert and Tom Anderson are the featured artists at Childhood’s End this month. Both are painters in the Abstract Expressionist tradition.

It seems like I’ve been seeing invitations to Chuck Gumpert’s shows for as long as I’ve been reviewing art; but unless my memory has failed me — which it does quite frequently — I don’t think I’ve ever reviewed his work, and I’m not even sure I’ve even seen any of his paintings except in reproduction. I was surprised at the small-to-moderate scale of these paintings, because on websites they look much larger. It’s his very expansive explosion of color and loosely brushed forms with no definite edges that make them look so much larger.

The paint looks like it is still wet. Everything has the feel of windswept storm clouds with bright sunlight bursting from behind the clouds. His surfaces are heavily layered with drips and splatters and scumbled paint. (It just dawned on me that “scumbled” is an art term that not everyone is familiar with. Here is the dictionary definition: “to soften (the color or tone of a painted area) by overlaying parts with opaque or semiopaque color applied thinly and lightly with an almost dry brush.”)

There are five Gumpert paintings in this show. Yellow is the predominant color. In each painting walking figures either approach the viewer or walk away in clouds and mist.  There is a nice sense of strength and mystery. The best of his works are the simplest, those with fewer figures and less color. The more complex images become too jangled.

Anderson is an Olympia institution. His work has been shown at Childhood’s End and elsewhere hundreds of times. His work is all about the scratched, beaten and layered surface and the materials on those surfaces, as he works almost exclusively on metal plates that are treated with chemicals, cut, scratched and drawn and painted upon. The main thrust of his work is the expressive use of texture and the gestural marks. His weakest point is his composition, which can be hit-or-miss, excellent in some works and random in others.

There is quite a variety of types of compositions this how, many based on repetition of almost identical forms or on a strong central element with equal balance of forms. One of the more interesting works is a triptych called “Madrid”(numbers 1, 2 and 3), which is an abstract urban scene with tan buildings and red rectangles on top that can be viewed as either brick buildings or a red sky, and a black form in the middle. References to recognizable subject matter in Anderson’s paintings are rare and are usually superfluous, but in this instance it works well.

“Blade” is a rusted, or rusted-appearing, circular saw blade perfectly centered on top of a large red circle that creates a kind of bright halo around the dull blade. This painting and “Madrid” are my favorites.

Some of the ones that are less balanced tend to lack unity, such as “Labwork,” a tall vertical painting that doesn’t quite hold together compositionally but which is, nevertheless, fascinating because of the juxtaposition of Mondrian-like boxes in primary colors with larger areas of subtle gray rectangles.

Also in this show is a large collection of ceramic sculptures by the husband-and-wife team of John and Robin Gumaelius. Most enjoyable are the four strange, exotic, humorous and highly inventive creatures on stands in front of the window.

How are we looking at the paintings of Mark Rothko these days?
Is he old hat, replaced in America by more contemporary concerns? Looking at his minimal canvases and their enticing floating squares of subdued paint live at the MOMA recently, I had to stop to wonder whether he still communicates to a modern and younger audience.
Wahooart, the site that sells good canvas prints to order from their database of digital images, has many Rothko prints. I ordered this one, Blue and Grey, that I have now hanging in my study. I can spend a long time looking at this elusive image that takes me to some other place not in this world.

Based on conversations I've had I think Rothko is still very much admired.