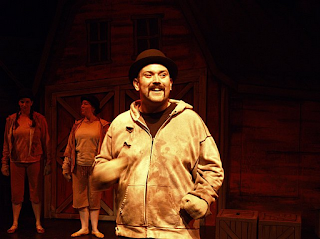 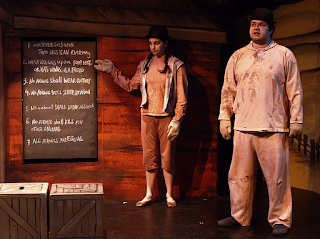 Pictured (top) Morgan Picton as Napoleon in front
and in back Heather Christopher and Ingrid Pharris Goebel,
(bottom) Heather Christopher as Squealer and Grant McGee as Snoball.
reviewed by Alec Clayton
I would venture to guess that the majority of the audience members at Olympia Family Theater’s production of “Animal Farm” read the George Orwell book years ago and have only sketchy memories of it. The full house opening night appeared to be thoroughly engrossed by the play, and a large portion of the crowd stayed for and reacted positively to the “forum theatre” after the show.
Orwell’s book is a simple tale of manipulative power written in a style easily appreciated by older children and adults alike. The anthropomorphic animals in the book represented revolutionaries in the Stalinist era but can easily be stand-ins today for political leaders who mislead and manipulate their followers in order to increase their own power and wealth. Orwell’s pigs Squealer and Napoleon bear a striking resemblance to … pick your corrupt politician or talk radio host or TV evangelist, and the horses and sheep clearly resemble the blindly obedient hoi polloi who attend their sermons and rallies.
Orwell illustrates how easily people of good will can be manipulated into acting against their own best interest, and his point is made more emphatically when seen live on stage.
Olympia Family Theater is a children’s theater that once per season does a show geared toward older children and adults. “Animal Farm” was a good choice, though a challenge to produce. Helping to meet that challenge successfully was Samantha Chandler’s skillful direction, a fine cast, and a stylized set by Jill Carter and Lyndsey Nichols that placed the story in the most advantageous framework, a balance between a delightful children’s entertainment and a serious adult parable. Carter’s animation, which used collaged images reminiscent of Terry Gilliam’s Monty Python animations, eases transitions and carries forward story elements that would be difficult to stage in another way. When the animations are playing the actors freeze on stage creating dramatic tableaux that enhance the scenes.
Speaking of animation, Heather Christopher’s face and gestures are a marvel of animated emotion. As Squealer, PR spokes-pig, Christopher enlivens every scene she is in. Even when seen in the background as a yet unnamed member of the ensemble in the opening scene her expressions broadcast to the audience that she is going to be a character to be reckoned with.
Morgan Picton comes across blustery and proud, with a loud and commanding voice as Napoleon, the militant leader of the pigs.
Ingrid Pharris Goebel returns to the stage after a two year hiatus to play the dual roles of Minimus and Pigeon. Her experience as a dancer and as a comic actor come to fore especially in her chirping voice and bird-like walk when she appears as Pigeon. She is a joy to watch.
Tom Sanders plays the complicated and conflicted Boxer with sincerity and restraint. Boxer is the most complex character in the story, a hard working horse who wants very much to believe in the revolution and in particular the revolutionary leaders. His repeated refrain is if Napoleon says it, it must be true. But Boxer has a hard time maintaining his loyalty in the face of indisputable facts.
Following the performance opening night, Tim McLeod, a community health educator, facilitated the forum theatre component of the show in which audience members and the cast looked at alternative approaches to some of the challenges presented by the situations. Were there better ways the other animals could have reacted to Napoleon and Squealer? Audience members made suggestions and some of them joined the actors on stage to improvise these new scenes. It was both entertaining and thought provoking. (A retired school teacher who took part later told me he thought it should be done in schools.)
The forum theatre will not happen after every show but will be done March 29, 30, 31 and April 8. People who are afraid of audience participation can rest assured that those who do not want to take part will not be asked to do so.
Performances are 7 p.m. Thursdays and Fridays and 1 p.m. Saturdays and Sundays to April 8.
Tickets are $16 adults, $13 senior/student/military and $9 youth under 12 (this show recommended for ages 10 and older)
Washington Center for the Performing Arts, Stage II / Black Box, 512 Washington St. SE, Olympia, 360-753-8586.
Tickets available online at http://www.olyft.org.
Posted by Alec Clayton at 11:41 AM