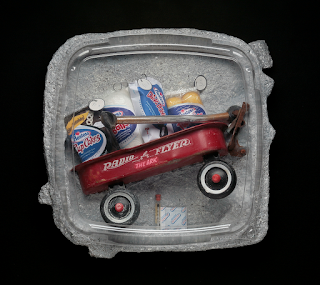 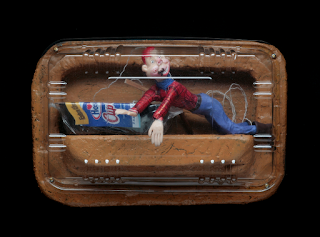 Top: “The Hostess Ark: Two by Two”
Bottom: "Puppet Love"
Assemblages by Lynn D. Nino. Courtesy Flow Gallery
In October of this year a team of British researchers is scheduled to dig down through three-kilometer-thick ice to explore Lake Ellsworth in the Antarctic, in hopes of finding new species and clues about the future impact of climate change.

But Tacoma artist Lynn Di Nino and her team of stalwart archeologists have beat them to the punch. And what did they find buried under the ice in Antarctica? Hostess cupcakes. Tons and tons of cupcakes and other Hostess products, plus many other consumer products that have been popular throughout most of our lives. Those damn cupcakes last forever, and that's the point of this art-as-archeology exhibition.

You can count on Di Nino to be cleverly relevant, and this show - like most of what she does - addresses important contemporary issues with wry humor. In this instance the issues are consumerism and environmental waste.

Called The Survivors, Di Nino's exhibition at Flow Gallery consists of museum-like displays of Hostess products and similar packaged food stuffs displayed in oddly shaped box-like structures covered with protective "glass." The "glass" being plastic packaging of the type manufacturers love to put everything from toys to apples in, the kind that clog our landfills, lakes and rivers. Di Nino's assemblages are like Pop Art versions of Joseph Cornell boxes but without the compartments. Each piece has a wall label that typically lists not only the media - concrete, wood, found objects, etc. - but also the ingredients of the food: bleached wheat flour, niacin, thiamine mononitrate (B1), riboflavin (B2), folic acid and so forth. The lists of ingredients are quite long.

"The Ark: Two by Two" has a little red Radio Flyer wagon loaded with packages of cupcakes, Sno Balls, Ding Dongs and Twinkies. "Puppy Love" has Howdy Doody on a shelf diving into a package of cupcakes. There are chocolate crumbs all over his mouth. "Ejectulation Confection" (yes, that's how she spells it) is rife with sexual symbolism. A Twinkies pack (had you ever noticed that they are phallic-shaped?) inserted into the vaginal, confetti-lined hole atop a Jack-in-the-Box.

I could go on forever. You get the idea. One more example: "Star Studded Cast" is an assemblage consisting of part of a Hills Coffee can, a yellow high-heel shoe, a Hostess cupcake and a pack of Camel cigarettes. The wall text next to it reads, in part: "These popular icons, as a group, seem to represent the U.S. in the '50s. Some have endured throughout time. Collectively they represent a walk down memory lane."

In Di Nino's art, concept overrides form. What the art says is more important than how it looks. But that does not mean she is not a fine craftsperson. These pieces are built with care, but don't go to this exhibit seeking aesthetic pleasure. Go for the message, for the clever and pun-filled wall labels and even - for those of a certain age - for the nostalgia.