Is she really back where she belongs? 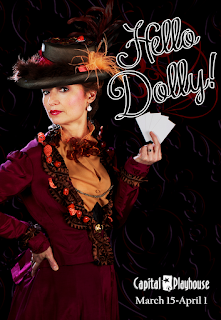 I am rooting for Capital Playhouse all the way, as shown by recent reviews of “Hair” and “Brighton Beach Memoirs” and my article “Resurrecting Capital Playhouse” forthurstontalk.com. But it’s hard to root for “Hello Dolly.” It’s one of those plays that epitomizes what people who love the schmaltz of Broadway musicals love and why other people hate Broadway musicals with passion. I guess I’m somewhere in the middle, and it depends on the show.

The Capital Playhouse production is beautifully staged, nicely directed and choreographed, Bruce Haasl’s set is gorgeous as are the costumes (Costumes by Ricky) and lighting by Matthew Lawrence. The red, red, red, red and sweet pink are particularly lovely. The acting is good, most astoundingly so in the work of Gwen Haw in the title role, Michael Self as Horace Vandergelder and Patrick Wigren as Cornelius Hackl. And the singing is outstanding.

So, with all that going for it, what’s not to love? The play, that’s what. After watching clips of Carol Channing in the Broadway production and after reviewing two local productions (first at Tacoma Musical Playhouse and now here), I am more than ever convinced that  “Hello Dolly” is one of America’s more overrated musicals.  The humor is weak, and it depends on lavish production numbers to hide the fact that there’s really not much there.

Katin Jacobs-Lake, who plays Mrs. Irene Molloy, has a beautiful voice that rings out with conviction. She also looks great in her high-society, turn-of-the-century dresses and hats. She fits this role much better than she fit in her previous outings as the drug-addicted stripper she portrayed in “Rent” at both Capital Playhouse and Tacoma Musical Playhouse.

In the title role of Dolly Levi, Haw is regal and elegant but not without some down-to-earth chutzpah. And her voice is fabulous. She demonstrates great power and range in songs such as “Before the Parade Passes By” and, of course, the signature song, “Hello Dolly.”

Bailey Boyd is her usual charming and energetic self as the silly shop girl Minnie Fay. Her exuberance is outstanding.

Michael Self is quickly proving himself to be the best newcomer to South Sound theater we’ve seen in a long time. His performance as “Scrooge” in his first appearance at Capital Playhouse was mind-bogglingly memorable. Horace Vandergelder is not as heavy-duty a role, but he gives it everything he’s got, walking a tightrope between outlandish comedy and realism — especially toward the end when he becomes more human he makes you believe in Horace. And his singing is astoundingly good, with a voice that is both smooth and strong.

Speaking of believable, Sean Stinnet plays the innocent youth, Barnaby Tucker, in such a way that anyone who has ever been that innocent can relate to. Of course he is Cornelius’s sidekick and as such he is always in his shadow — and what a shadow to be in, because Wigren’s Cornelius steals every scene he is in. Not on purpose; he doesn’t upstage anyone or step on anyone’s lines, he’s just so damn good you can’t take your eyes off him. His drop-jaw facial expressions and his long-legged dance moves rival those of a young Dick Van Dyck — whom I can’t not think of while watching Wigren. What a gem. This is his best performance since he played Rooster in “Annie.”

Capital Playhouse brought in a guest director/choreographer from Boston for this one. And what credentials he has! Kevin P. Hill directed and choreographed the revival of “Guys and Dolls” on Broadway, and he has previously directed, choreographed and performed in many incarnations of “Hello Dolly” including with the great Leslie Uggams and with Carol Channing. I interviewed Hill prior to this show, and he was very excited about the cast and the theater. He said the show plays better in the more intimate space of Capital Playhouse than it does on larger stages. He said he was going back to the original version as choreographed by Gower Champion. Overall I felt that Hill’s work on this was excellent, with one exception, that being that some of the acting was overdone. Sara Flotree Beekman’s over-the-top performance as Ernestina Money and as the ridiculous Mrs. Rose needed to be toned down a notch, as did the constantly irritating crying by Ermengarde (Emma Barnes). Even Boyd in all her energetic charm could have toned it down a tiny bit.

My final complaint is that dreadful restaurant scene where they kept opening and closing curtains. I hated that scene when I saw it at Tacoma Musical Playhouse, and I hated it again opening night at Capital Playhouse. It is like an interminable bad version of a Marx Brothers scene.

So, congratulations to the cast and technical crew for doing the best they could on a property that should have been put to rest by about 1970. (I’m going to catch hell for saying that.)