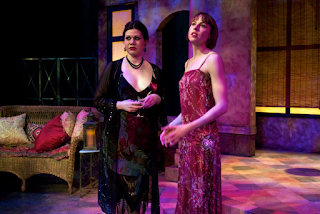 Pictured (top) Deya Ozburn as Lady Caroline Bramble and Helen Harvester as Lotty Wilton, (bottom) Walayn Sharples as Mrs. Graves,  Aaron Lam as Mellersh, and Alexandra Novotny as Costanza. Photos courtesy Harlequin Productions.
This is the third time I’ve reviewed “Enchanted April,” and with few exceptions I could copy and paste my remarks from either of my earlier reviews and they would be equally true of Harlequin Productions’ treatment of this charming modern classic. The first time I reviewed it was when Olympia Little Theatre did it in the fall of 2005 with engrossing performances by Heather Christopher and Christina Collins. The second time I reviewed it was two years ago at Centerstage in Federal Way, which was an equally delightful show starring Caitlin Frances as Rose and featuring a stunning set by Greg Heinzle of Seattle Scenic Studios.
More so than almost any other play I can think of the set plays a major role in this play, and that is the one area where Harlequin’s version outshines the others. OLT’s set was outstanding considering the limited budget they have to work with. Centerstage hired out to a professional scene shop and had a beautiful set. Kudos to them both. But now to Linda Whitney’s set at Harlequin. It is breathtaking.
For readers who have never seen “Enchanted April” I have to explain why the set is so important. The play is about transformation. Act one takes place in a rainy and dreary London right after World War I. Everything, including the lives of the principle characters, is gray and depressing. But in act two we’re transformed to a beautiful castle on the sunny coast of Italy where enchantment transforms Lotty and Rose and Lady Caroline and Mrs. Graves’ dreary lives. The curtain rises on splendor at the beginning of act two (metaphorically, there’s no actual curtain). It’s like the transformation when we first see the garden in “The Secret Garden,” only elevated about ten-fold. It made me wish I had stayed in my seat to watch how they did it during intermission, but that would have detracted from the magic.
In the London scene there is a heavy gray wall with translucent windows through which sporadic lightning flashes are seen. The sparse furnishings consist of a few tables and chairs and a hard bench. The Tuscany set is a huge castle with turrets and red tile roof, a majestic, flower-strewn garden and beautiful furnishings including many luxurious pillows on the lounge Lady Caroline reclines on (and where she hides her flask). All of this is washed with gorgeous red and blue lighting (Kate Arvin, lighting designer).
The story is a period piece. It is a comedy of manners that turns into a farce. Lotty (Helen Harvester) and Rose (Maggie Lofquist) want to escape their crappy marriages to, respectively, Mellersh (Aaron Lamb), a dull and stuffy lawyer, and Frederick (Ryan Holmberg), an arrogant writer with a lover on the side. The women rent the castle in Tuscany for a month and get two other women to help them share the cost. They are Lady Caroline (Deya Ozburn), a thoroughly jaded woman who drinks a lot, and Mrs. Graves (Walayn Sharples), an elderly dowager who is disdainful of everyone. Other characters are Antony Wilding (Rob Taylor), the handsome and charming artist who owns the castle, and Costanza (Alexandra Novotny), an Italian maid who speaks no English but communicates quite well, and quite comically, through wild gestures and facial expressions.
The whole cast is very good. They play their parts mostly with restraint but become increasingly expressive and farcical as the play proceeds — the notable exception being Novotny who is outlandish from the get-go; she comes very close to over acting, but it works for this part.
“Enchanted April” takes a while to get started. It’s hard to show the dull lives of these characters before they go to Tuscany, but that sets the stage and once they get there it is hilarious.
WHEN: Thursdays through Saturdays, 8p.m., Sundays 2 p.m. through April 7
WHERE: State Theater, 202 E. 4th Ave., Olympia
TICKETS: prices vary, call for details
INFORMATION: 360-786-0151; http://www.harlequinproductions.org/
Posted by Alec Clayton at 11:04 AM