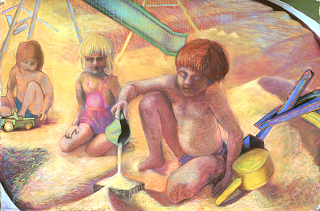 By Your Own Sweet Skill (top) Children in Sunlight,  both pastels by Louise Williams done in 1994

I'm still enjoying the book about the artist Louise Williams that I wrote about for this blog two weeks ago, Louise Rae Williams: Her Life and Work 1947-2004. It's a fascinating book partly because her art is so inconsistent. Frankly, she sometimes can't draw worth a flip, but other times her drawing is superb. How do you account for that? I surely don't know, but I know that such inconsistency is not uncommon among artists (including me back when I was actually making art and not just writing about it). Heck, even the great master Pablo Picasso turned out some perfectly horrible drawings and paintings.

This could be an object lesson in art appreciation. It's a comparison of two Louise Williams paintings.

"Children in Sunlight", a 1994 pastel, pictures three children at play in a sandbox. It's overly sweet, trite, clumsily drawn and strangely disturbing in an unintentional way. "By Your Own Sweet Skill," another pastel from the same year that's printed on the facing page in the book, is intentionally disturbing, beautifully drawn and mesmerizing. I wish I could own this painting.

One thing I like about both works is that each is color-keyed to a narrow value range. The colors in "Children" actually remind me of Pierre Bonnard, the great Post-Impressionist colorist, and the colors in "Sweet Skill" remind me of another great painter from the same period, Paul Gauguin. (The imagery and drawing in this one also reminds me of Gauguin.)

There is some clumsy drawing in "Children" that detracts from its sweetness. Both of the boys in the picture have legs that don't attach at the hip the way they should, and their hands look like claws, and the girl's face is harsh, mostly because of the dark shadows around her eyes. On the upside, the contour line on the boy on the right from his shoulder to his hand is exquisitely drawn with nicely flowing marks.

The composition of "Children" could stand some improvement. One thing I do like about the composition is that each of the four corners is different, a device artists often use to keep the viewer's eye from getting stuck on the central figures. I also like the circular edges of the sandbox seen at top right and bottom left. But the rest of the composition seems haphazard and unplanned, especially the harsh angle of the slide that touches the boy's head. If Williams was working from a photo or an actual scene, I suspect she just painted what was there with little thought about how the placement of objects might affect the design. But here again there's an upside. The chance quality of the composition lends to the painting the unpretentious feel of a snapshot; it's an unposed and natural moment.

"Sweet Skill" is a powerful image. The chunkiness and strength of the figure is like Picasso's gigantic classical figures and also like Gauguin's paintings of Tahitian girls. It's monstrous and sexy at the same time. I love the way she clings to the tree trunk and the way she seems to be one with the tree due to the similarity of colors between body and tree limbs. The colors set an ominous mood, and the dark-light contrasts and that strange mask-like face add dramatic impact.

I wish everyone reading this could get a copy of this book, and I wish I could sit down with each of you and go through it and talk about all the of the pictures. We might disagree on many of them, but I suspect we would like a lot more of them than we dislike. There are a limited number of copies left. While supplies last you may get yours by e-mailing Thomas Lineham at tlineham@comcast.net
Posted by Alec Clayton at 8:55 AM