Lady Day and the Blues

You know her from "Dreamgirls" at Tacoma Little Theatre (my pick for best actor, female, in a muscal in 2006) amd from "Ain't Misbehavin'" at Centerstage and many other outstanding musical performances around the South Sound. Now she's doing a Billie Holiday tribune performance at Centerstage. 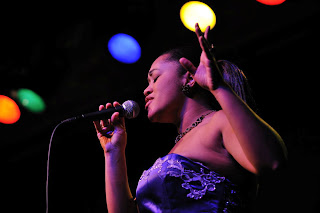 Here's a shortened version of the press release (which, incidentally, quotes me and calls me a "noted  theatre critic," thank you very much):

(Federal Way, WA) - Purple Phoenix Productions is excited to announce return of a new concert tribute to the music recorded by the legendary Billie Holiday, LADY DAY AND THE BLUES: The Billie Holiday Songbook. This one-woman concert is performed by gifted vocalist/entertainer Stacie Calkins, accompanied by a live 5-piece jazz ensemble, and is a Benefit for CenterStage  - a semi-professional theatre company that performs at the Knutzen Family Theatre, located at the Dumas Bay Center in Federal Way, WA.

Billie Holiday is considered one of the iconic jazz vocalists of all time. Influenced by the jazz instrumentalists of the 1930’s and ‘40’s, she pioneered a new way of manipulating vocal phrasing. Most jazz aficionados consider that she changed the sound of popular singing forever.

The tribute will include songs that Ms. Holiday enjoyed great success with: “Lover Man (Where Can You Be)”, “I Cover The Waterfront”, “Them There Eyes”, “I Cried For You”, “You’ve Changed” and “Good Morning Heartache”. While known as a vocalist, Holiday was also a prolific songwriter and poet, and the concert features many songs written by her, including “Lady Sings The Blues”, “Tell Me More and More and Then Some”, “Fine And Mellow”, “Billie’s Blues (I Love My Man)”, “Don’t Explain” and the legendary “God Bless The Child”.  Also included will be the controversial classic “Strange Fruit” which Holiday recorded in 1939. The lyrics were originally a poem written by a Jewish poet in New York, who later set it to music. When it was brought to Billie’s attention, she initially resisted singing it because it reminded her or her father’s death. When she finally decided to sing it, her record label didn’t want her to record it because of the serious political nature of the song – a vivid description of the aftermath of a lynching. Eventually she got a release to record it elsewhere. Even though many radio stations refused to play it, it became a cult classic and she included it in her nightclub and concert repertoire for the remainder of her career.

The March 5 performance of LADY DAY AND THE BLUES will begin at 8:00 p.m. There is a $15 per person donation requested.  Seating is on a first-come-first-serve basis.
Posted by Alec Clayton at 8:24 AM