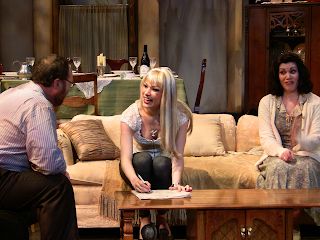 What do you get when you take a great play, perfect cast and spot-on set and lighting? The answer is “The Last Schwartz” by Deborah Zoe Laufer as produced by Harlequin Productions.

The set by Linda Whitney, who also directs this show, is the richly decorated living and dining room of an old country home in the Catskills. The muted colors are wonderful, and the lighting by Jill Carter goes from natural to dreamily supernatural when Simon (Casey Brown) steps out of his usual trance to speak directly to the audience (or whatever gods or alien beings he might be addressing). There also are transitional lighting effects between scenes that simulate the shadows and moving light created by the movement of clouds. These effects are worthy of a fine film.

I can’t say enough about the cast. As an ensemble, they become the Schwartz family. The group is as funny, spiteful, loving and dysfunctional as any family in recent literature.

Ann Flannigan is Norma, the eldest of the Schwartz siblings, who feels it is her duty to keep the family and its religious traditions intact. Flannigan plays her as controlling and uptight, but there’s a spark of something decent that makes you not so much dislike her as wish she would loosen up.

Herb, the oldest brother, is played by Scott C. Brown. His facial expressions are hilarious yet so subtle that he tends to lull you into complacency until he explodes with passion, jumping up on a coffee table, for instance, and defiantly claiming the beat-up and worthless piece of furniture as his personal property. Everybody is funny in this play, and he is the kind of funny that makes you want to slap your head and shout, “Wow! Where did that come from?” He makes Herb seem wonderfully ludicrous yet genuine.

Simon, the middle brother, is so shut down and otherworldly that playing him is a real challenge to an actor, and Casey Brown plays him beautifully. His movements and speech are excruciatingly slow. He conveys the idea that it is a major challenge for Simon to break out of his private world and react to anyone.

Deya Ozburn plays Herb’s wife, Bonnie. She is the most complex character in the play. She is confused, scared and burdened with secrets. The range of emotions both nuanced and dramatic that Ozburn conveys is huge and authentic.

The youngest brother, Gene, is played by David Brown. Like Bonnie, Gene often seems discombobulated. Brown plays him as down-to-earth and likeable in a fine bit of underplayed acting.

The one character who is not part of the family is Gene’s girlfriend, Kia, a small-time actress portrayed with unbridled joy and energy by Alison Monda. She lights up the stage with her physical antics. She just wants to have fun, and she is enjoyable to watch. Her outfits (costumes by Darren Mills) are wild and perfectly match her unbridled exuberance.

“The Last Schwartz” balances comedy and drama. We ache for the Schwartz family members. We love them and hate them and laugh all the way to the family patriarch’s grave and beyond.
Posted by Alec Clayton at 5:26 PM