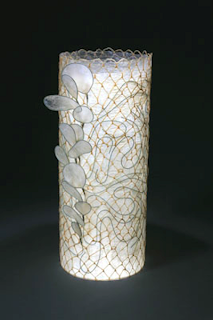 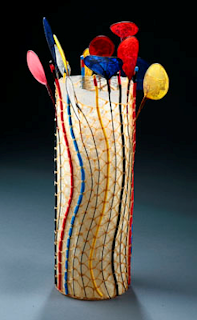 Published in the Weekly Volano, February 9, 2011

Works by Jill Nordfors Clark are a prime example. Her sculpted basket "After Calder II" is done in a signature Clark style with her signature hog gut and other unusual materials. It has the classical cylindrical form with the slight variations in surface decoration I've come to expect from her work - and the same delicacy and beauty. But her other works in this show, while similar in form and style, have a brand new element: color. Bright, vivid color. At first blush my tendency was to prefer the one with the natural tones because the natural tones highlight the uniqueness of her materials. But I can't deny the appeal of the bright colors. Clark's works are among the best in the show.

But the absolute best, the one that just knocked my socks off because of its grand scale and nuanced forms and color changes, was Toot Reid's quilt titled "April 1, 2009-September 25, 2010." The title represents the start and end dates of working on this monumental quilt, which consists of six panels, each approximately three feet wide by five feet tall. Within each panel are intricate yet simple square shapes in subtly changing colors that look like ceramic tiles until you get close enough to the surface to see the weave of the cloth and notice the loose and almost invisible threads that extend inches beyond the surface. This is truly a beautiful work of art.

Another powerful piece is a strange steel cabinet by Timothy Leonard with fused and painted glass doors in a soft, cloudy blue by Susan O'Brien. One of the open doors reveals a golden chalice in blown and carved glass by Stephan Cox. The chalice didn't particularly impress me, but the cabinet did. It has qualities of old fashioned diving gear and also of caskets and an odd shape that twists and tapers from a small base to a broad square top.

The rest of the show consists of highly skilled but predictable quilts, turned wood, glass and paintings by familiar names such as Erika Carter, Art Hansen and Michael Ferguson. One other piece that I thought was particularly impressive was Merryll Saylan's turned wood "Still Juggling Balls." It is a round, flat bowl with circular indented lines following the circumference, and an opening in the middle that holds five little wooden balls. It is all in beautiful shades of blue and the lines create the impression of fast centrifugal motion on the outside with perfect stillness in the middle.