'The Drowsy Chaperone' at Tacoma Musical Playhouse unfolds with a wink, nod 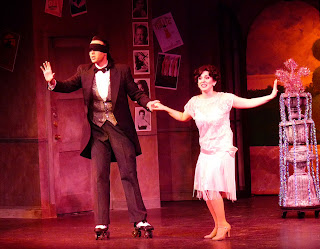 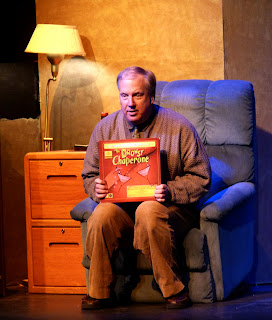 Tacoma Musical Playhouse is producing the regional premiere of the Tony Award-winning musical “The Drowsy Chaperone,” and I found it to be funny, sweet and upbeat.

In a strangely Thurburesque telling of a fantasy tale that combines contemporary humor with Broadway musical traditions, a character listed in the program as simply the “Man in the Chair” invites us into his cramped New York apartment and shares with us his love of old musicals.

He begins by simultaneously praising and debunking musical comedy traditions.

For example, he tells the audience he wants the actors to stay out of the aisle because when they come off stage, the “fourth wall” comes tumbling down.

He apparently is unaware that by talking directly to the audience, he’s tearing down that same metaphorical wall. Such is the tone and cleverness of the play.

The Man in the Chair (who, by the way, gets up out of that chair quite often) plays a record of a favorite musical from 1928 and the old show magically materializes in his apartment.

We watch and listen with him, and he periodically stops the record to critique the play. He makes fun of the overly dramatic acting, the silly Vaudeville-style jokes and the thin story line. He says the stories in musicals are just excuses for getting from one big production number to the next.

But in this show, the bits between the musical numbers are in many ways the most enjoyable moments in the show. Attribute that to clever, tongue-in-cheek writing by Bob Martin and Don McKellar and great comic acting by TMP artistic director Jon Douglas Rake as Man in the Chair. This is the funniest and most natural acting I’ve seen from him. If he seems typecast in this role, there might be a good reason. As artistic director, Rake gets to play a big role in picking the plays, and he surely was attracted to this one because he was able to identify so thoroughly with the storyteller.

The story unfolds with a wink and a nod; it’s modern and sarcastic. The musical within is a delightful and romantic jazz-age romp.

Other characters are bent on stopping the wedding – particularly Janet’s manager, Mr. Feldzieg (John Miller). He hires two gangsters disguised as bakers (brothers Mickey and Matt Dela Cruz) and an aging lothario, Aldolpho (John B. Cooper), to break them up. Also intent on breaking them up is the over-the-hill alcoholic diva (Nancy Hebert), known as the drowsy (read “tipsy”) chaperone.

The whole show is filled with surprises.