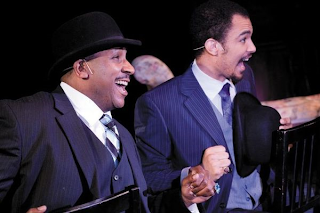 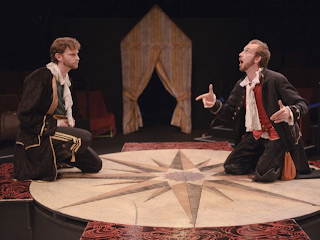 Top: MICHELLE SMITH LEWIS/COURTESY OF CENTERSTAGE THEATRE - Bill Bland, left, and Jesse Smith belt out tunes in “Ain’t Misbehavin’” at Centerstage Theatre last year. The most noteworthy song in a South Sound musical in 2010 was Bland’s “Your Feets Too Big.”

Last year brought a lot of excellent theater to South Sound, but only a few truly indelible moments.

The most memorable of all is the huge fight scene in “Rosencrantz & Guildenstern Are Dead” at Lakewood Playhouse.

There was amazing synchronized movement of 13 actors on stage at once running, leaping and fighting with dexterity and timing to rival Buster Keaton or the Marx Brothers. The most astonishing part of all was when two characters rushed across the stage carrying a large carriage wheel between them, and Christian Doyle leaped over the wheel.

A fight scene provides the perfect overture to a death scene: One of the most stunning death scenes of the year was the death of Christina Collins as Emilia and Erica Penn as Desdemona in Theatre Artist Olympia’s “Othello” at Olympia Little Theatre. In death they became statues of classical goddesses and I was mesmerized by their exquisiteness.

The most noteworthy song in a musical in 2010 was Bill Bland’s “Your Feets Too Big” in “Ain’t Misbehavin’ ” at Centerstage Theatre. I’ve loved that song since first hearing it in 1978, but this version especially resonated with me for a particular reason: In each show, Bland picked out someone in the audience and sang it directly to him or her while practically touching their “big” feet. This time I was in the front row and he picked me out of the audience, even though my feet are tiny, which made it funny. Ah, but he sang it with such passion and rhythm and humor. And David Duvall’s piano accompaniment was great. It was only after the show that Bland found out that he had picked a theater critic to sing to.

From great singing, we transition to memorable dancing, and “White Christmas” at Tacoma Musical Playhouse was full of great dancing – most notably a ballroom dance number by husband-and-wife team Vince and Jennifer Wingerter to the tune of “The Best Things Happen While You’re Dancing.”

And sometimes just walking across the stage can be a dance, as proven by Patrick Wigren as the sleazy con man Rooster in “Annie” at Capital Playhouse in Olympia. Tall and skinny, he used his lanky frame to great advantage, taking a huge step onto the stage, plopping his foot on Mrs. Hannigan’s desk and crowing in the funniest stage entrance I’ve seen in a long time.

The most difficult-to-watch moment in theater this year was the seduction of L’il Bit, played by Heather Christopher, by Uncle Peck, played by Tim Hoban, in Paula Vogel’s Pulitzer Prize-winning play “How I Learned to Drive” at The Midnight Sun Performance Space in Olympia. It was an emotional moment fraught with controlled intensity, and I think everyone in the audience was squirming as much as I was. It was not something I enjoyed, but I admired the cast’s courage to tackle this difficult subject with unflinching finesse.

One of the sweetest moments in theater was when Samantha Camp as Artie tried to fly in “Eleemosynary” at Tacoma Little Theatre. Her acting was perfectly underplayed, nuanced and natural, and I felt as if I were feeling every emotion she felt.

Also underplayed and nuanced was the emotional meltdown of Jason Haws as Howie Corbett in Harlequin Production’s “Rabbit Hole.” Seldom have I seen such controlled intensity.

Finally, I have to mention another moment, even though it was not this year, but rather one of the last shows of the previous year: Alison Monda as Poona in “Poona the **** Dog” at Theater Artists Olympia. Crawling on the floor in a big pink box, she threw herself into this strange comical role with a wild abandon similar to that displayed by Christian Doyle in his wild leap in “Rosencrantz and Guildenstern.” Equally outlandish and funny in this show was Lauren O’Neill as the television who rules the world. (Doyle also was in this show in the outlandish role of Poona’s “Fairy God Phallus.”)

The year 2010 brought incredible moments on stage, and I can’t wait to see whether area theaters can top them in 2011.
Posted by Alec Clayton at 11:00 AM