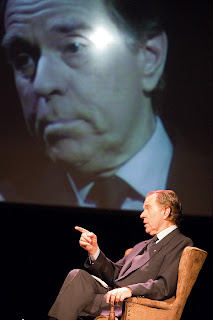 The News Tribune, JaNUARY 21, 2011
‘Frost/Nixon” is a riveting drama spiced with a lot more humor than one might expect and made more real and immediate by the technical innovations of set designer Scott Campbell and director Brie Yost.

People who expect it to be just a retelling of political history they already know might be surprised at how entertaining this show is, and people who saw the movie might be surprised to find themselves even more engrossed with this stage performance.

It moves quicker, despite being almost two hours long with no intermission, and you might come away believing, as I did, that Steve Tarry is a better Richard M. Nixon than was Frank Langella, who won an Academy Award for best actor for his role and a Tony Award for the same role on Broadway.

As the play progresses, Tarry nails the character so well that he begins to look increasingly like Nixon, especially in the huge projected close-ups of his face.

In the director’s notes in the program, Yost made two very telling statements that exemplify the uniqueness of this production.

First, she commented that when first asked to direct this play, she said, “All I want is Richard Nixon’s face to be really, really big.”

And second, she said that playwright Peter Morgan’s “brilliant script ... has been sprinkled with my own quirky sense of humor.”

Much of the action takes place in the television studio. Often the main characters are partially blocked from the audience’s view by cameras and sound boards and a bevy of technicians and assistants, but their images are seen larger than life on three projection screens and a half dozen or more televisions.

Some viewers might find that distracting, but it adds immeasurably to the feeling of authenticity, and there was only one brief moment when I was unable to see everyone I needed to see.

All of the supporting actors are good, but Nixon is such a compelling character and Tarry’s portrayal so mesmerizing that he commands total attention whenever he is on stage.

Other actors who stand out are Gabe McClelland as Nixon biographer and critic Jim Reston; James A. Gilletti, a relative newcomer to the stage, as David Frost; Charlie Birdsell as Nixon chief of staff Jack Brennan; and Christian Carvajal in an engrossing performance as ABC News correspondent Bob Zelnick. While rehearsing Frost for his interview with Nixon, Zelnick does a comic impersonation of the president that is hilarious, even though it is hard to understand what he’s saying.

Also doing a commendable job of acting in a role that didn’t give her much of an opportunity to stand out was Alleena Tribble as David Frost’s girlfriend, Caroline Cushing.

As noted earlier, there is no intermission, but the concession stand is open before and after the performance and there is a talk-back with the cast and director following a short break.

I highly recommend this play.